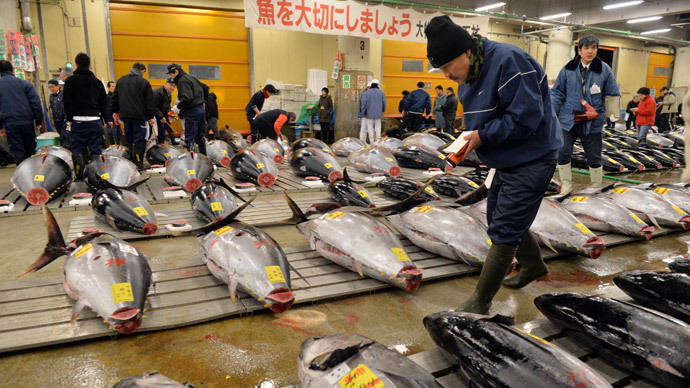 While the state of Oregon gears up to test its shores for radioactive contamination from Japan’s Fukushima nuclear disaster, university scientists have found that radiation levels in some albacore tuna caught off its coast have tripled.

According to researchers at the University of Oregon, the results came after tests analyzed the cesium levels in 26 tuna caught prior to the 2011 nuclear calamity – as far back as 2008 – and those caught after the accident.

Although the levels of radioactive isotopes in some of the tuna tripled after the disaster, the researchers found they are still “a thousand times lower” than the safety standards outlined by the US Department of Agriculture.

“A year of eating albacore with these cesium traces is about the same dose of radiation as you get from spending 23 seconds in a stuffy basement from radon gas,” the study’s lead author, Delvan Neville said to Oregon’s Statesman Journal.

Still, Neville added that the discovery of any amount of radiation is significant.

“You can’t say there is absolutely zero risk because any radiation is assumed to carry at least some small risk,” he said. “But these trace levels are too small to be a realistic concern.”

Researchers stated that the migration paths of the tuna could also affect the levels of radiation going forward. Most of the 3-year-old tuna tested had no traces of Fukushima radiation, but 4-year-old tuna – which likely traveled through the radioactive plume a couple of times – had higher cesium levels. Continued migration could increase cesium levels further, but the researchers said it would still fall well below maximum safety levels.

Since the results did reveal a spike in radiation, though, the researchers will be expanding their study beyond Oregon to test a larger number of tuna across the West Coast.

“The presence of these radioactive isotopes is actually helping us in an odd way – giving us information that will allow us to estimate how albacore tuna migrate between our West Coast and Japan,” Neville told the Journal.

Meanwhile, Oregon state itself plans to hold its next quarterly radiation test on May 13. Back in February, Ken Buesseler of the Woods Hole Oceanographic Institution stated that a plume of radioactive water from Fukushima would likely hit the US West Coast by April 2014. Buesseler said the plume is likely too diluted to pose a health concern to Americans or the habitat, but added that only testing will be able to confirm his belief.

– Jean-Michel Cousteau Warns Californians About Fukushima Plume: It Could Be Dangerous; I’m Not Touching Bluefin Tuna, I’m Done Due To Pollution

– The Tuna Deception: Skipjack Tuna (Katsuo) Caught Off The Coast Of Fukushima Shipped To Other Ports in Other Prefectures