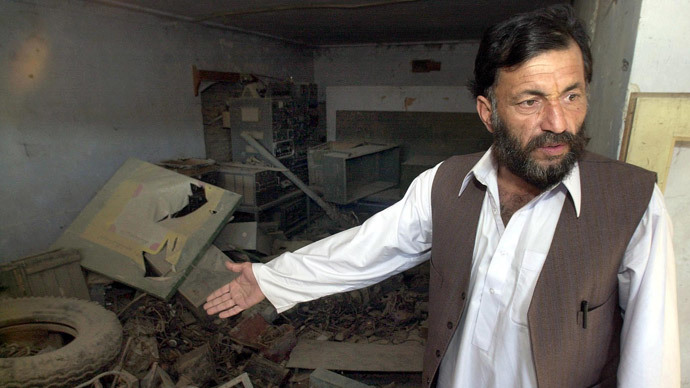 Recruited to help run Afghanistan’s security and intelligence operations in the aftermath of the US war against the Taliban, the country’s most feared security official dubbed ‘torturer in chief’ now has settled in a pink two-story house in California.

Before his move to the US, Gulalai helped American troops retake Kandahar in 2001 and was tapped to run the intelligence program in the city. Later, he was put in charge of the long-term custody of prisoners at the National Directorate of Security’s headquarters in Kabul.

According to a new report by the Washington Post, Haji Gulalai has “a substantial record of human rights abuses.” On two separate occasions, United Nations officials convinced the NDS to set in motion orders to fire him from the agency, yet those efforts were stymied both times by Afghan President Hamid Karzai.

“He was the torturer in chief,” a senior Western diplomat, who was unnamed, told the Post.

According to a secret memo by the United Nations, Gulalai was “personally involved in conducting beatings amounting to torture, in detaining suspects illegally and arbitrarily and in deliberately and systematically evading detention monitoring.” Additionally, the memo mentioned instances of “disappearances” that were unaccounted for and “an extra-judicial killing and cover-up [that] seems very credible.”

The memo also added that his interrogation tactics “included beating with a stick to the point of drawing blood, sleep deprivation for as long as thirteen days, protracted periods fastened with handcuffs and chains and suspension from the ceiling.”

Despite his brutal track record, which came alongside allegations that his actions pushed some local Afghans to sympathize with and join the Taliban, Gulalai was promoted by the NDS. Now, however, he and a dozen of his relatives are living in California, raising questions about how he managed to get through the US immigration system.

Some Afghan officials claimed the reason Gulalai was able to move to the US was through his connections with those in American intelligence agencies, but the CIA denied this was the case. The State Department and Department for Homeland Security, meanwhile, declined to comment on the matter due to privacy restrictions.

Gulalai’s case is notable because many Afghans who have worked for the United States have been unable to secure visas to land on American soil due to the perception that they are targets of the Taliban. Gulalai survived attempts on his life at least twice in Afghanistan. Meanwhile, others – such as Afghan interpreters who worked for the US – have been turned away because the State Department claims they are in no serious danger at home.

Although US law prohibits the country from granting asylum to those who have persecuted others, Gulalai made it through hearings on his immigration status unscathed. As noted by the Post, Gulalai applied using his real name – Kamal Achakzai – and that may have complicated screenings on his background, but experts told the newspaper that even the government’s screenings may not uncover human rights abuses.

Still, at one point during a hearing, the US lawyer disputing Achakzai’s claim asked multiple times if he’d ever been known by another name, even asking bluntly, “Then who is Gulalai?” At this point, Gulalai said it was just a family nickname.

Although Gulalai’s record has drawn the ire of many groups, there have also been questions about the CIA’s own behavior, since it essentially helped create and fund the NDS in Afhganistan. It recruited the group of Pashtuns – including Gulalai – that helped form the agency’s foundation in Kandahar and also trained them.

Regarding torture, a former US intelligence official told the Post that training sessions explicitly stated the agency’s stance against the practice – “Whenever [NDS] captured anybody,” the official recalled, “we’d say you have to respect their human rights.” However, these messages came even while the CIA was establishing its own prisons in which Al-Qaeda suspects were exposed to tactics such as waterboarding.

According to the newspaper, the NDS “became an extension of the CIA” and ballooned to more than 20,000 employees.

Even after Gulalai’s move to the US, allegations of abuse remained. The UN is scheduled to release a third report later this year that will likely show progress at the NDA as well as continued torture.

“Despite significant remedial steps, torture continues because there’s no real deterrent,” said Georgette Gagnon, U.N. human rights chief in Afghanistan. “We’re not aware of any NDS official who has been prosecuted or fired for using torture.”