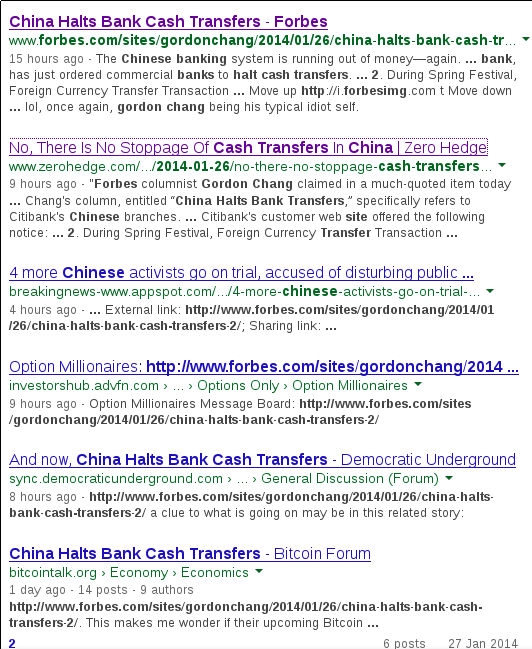 The Forbes article has been removed. (Google screenshot)

Earlier today, Forbes managed to spook readers with a bombastic report that China’s commercial banks had been instructed by the PBOC to halt cash transfers – something which would have dire implications on China’s banking system ahead of its new year holiday, and send the banking system into a tailspin just as China is desperate to avoid all turbulence ahead of a potential shadow banking default.

Leaving aside the fact that one should typically rely on official PBOC advisories, posted quite clearly on its website (where one finds no mention of this notice), one could simply keep track of interbank liquidity indicators such as repo and SHIBOR, both of which dropped, indicating that liquidity actually improved.

Anyway, here is what really happened, as reported by China Compass. “Forbes columnist Gordon Chang claimed in a much-quoted item today that the Peoples Bank of China had instructed commercial banks to halt cash transfers. Chang’s column, entitled “China Halts Bank Transfers,” specifically refers to Citibank’s Chinese branches. The report is entirely misleading.” Our advice – focus on the real “weakest links” in China’s banking system, of which there are many and are backed by facts, not the least of which is the potential upcoming shadow banking default. Ignore groundless rumors and speculation.

According to Citibank China Customer Service, the bank is conducting a routine system upgrade over the first few days of the upcoming New Year bank holiday. System maintenance of this sort has occurred several times in the past. The PBOC has not—repeat not—asked Citibank to stop customers from wiring funds. Customers can still log on to their account to put in fund transfer requests at any time. The receiving bank (non-Citibank) will process the funds to be transferred on the next business day, as it always does. Because of the Lunar New Year break, the next business day is Friday Feb. 7. This is no different from the practice of banks throughout the world. Chang’s understanding of Chinese culture evidently does not extend to the timing of bank holidays.

January 30, 2014 4PM is the afternoon of the Chinese New Year eve. Nobody will be around by 5PM as the Hong Kong stock exchange has a half-day trading day.

1. Due to the system maintenance of People’s Bank of China, Domestic RMB Fund Transfer through Citibank (China) Online and Citi Mobile will be delayed during January 30th 2014, 16:00pm to February 2nd 2014, 18:30pm. As to the fund availability at the receiving bank, it depends on the processing requirements and turnaround time of the receiving bank. We apologize for any inconvenience caused.

2. During Spring Festival, Foreign Currency Transfer Transaction through Citibank (China) Online and Citi Mobile will be temporally not available from January 30, 2014 18:00pm to February 7, 2014 09:00am. We apologize for any inconvenience caused.

All that said, China certainly has all too real liquidity (and solvency) problems – none of which have anything to do with a suicidal act by the PBOC – as explained here extensively in the prior weeks and months, captured best by the fact that both China’s and HSBC’s CDS are both at multi-month highs. 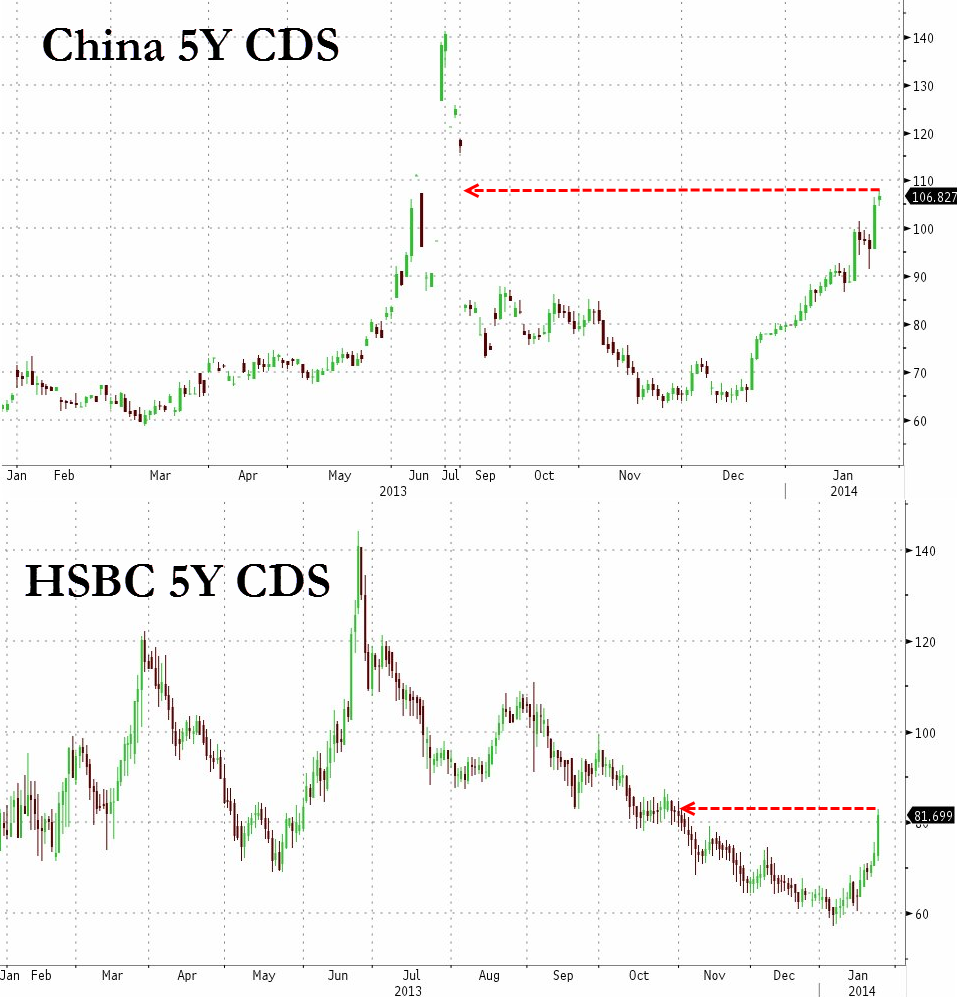