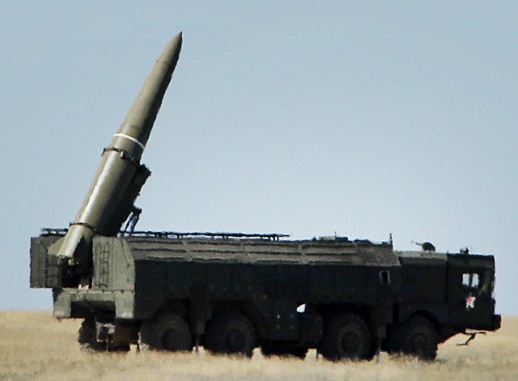 In his recent annual meeting with the media, Russian President Vladimir Putin replied to a question about the rumored placement of Russian Iskander missiles in Kaliningrad next to Poland.

He stated that US missile defense remains a threat to Russian national security and that Russia has the right to place Iskander missiles in Kalingrad, but claimed that that step had not yet been taken. Putin added however that putting Iskander missiles in Kaliningrad would be a logical response to American plans to build a missile defense system in Europe.

What few in the West outside a handful of military experts grasp however, is that the US project to install so-called Ballistic Missile Defense missiles and special radar in Poland, Czech Republic, Turkey and Bulgaria is the most provocative act of Washington to the very existence of Russia and risks putting the world on a hair-trigger to a nuclear war.

Putin’s remarks followed a report in the ardently-pro US German daily, Bild Zeitung. Several days before the Putin remarks, Bild newspaper reported that secret satellite imagery showed Iskander-M missiles stationed near the Polish border. Both Bild and mainstream US and European media portrayed the Kaliningrad report as a confirmation of a Russian aggressiveness, a return to the Cold War. In point of fact, for Washington and the US military, the Cold War never ended. Washington’s’ Missile Defense is the most extreme provocation imaginable in a nuclear era. It is an atomic version of Russian Roulette that makes the likelihood of a preemptive reaction by Moscow against Polish missiles or Czech AMD radar highly logical. A bit of background is useful.

In February 2007, Russia’s President Vladimir Putin addressed the annual Munich, Germany International Conference on Security, formerly the Wehrkunde Conference. Delivering a keynote speech that was extraordinary by any standards, Putin’s remarks caught many in the West by surprise:

NATO has put its frontline forces on our borders…[I]t is obvious that NATO expansion does not have any relation with the modernisation of the Alliance itself or with ensuring security in Europe. On the contrary, it represents a serious provocation that reduces the level of mutual trust. And we have the right to

ask: against whom is this expansion intended? And what happened to the assurances our western partners made after the dissolution of the Warsaw Pact?[1]

Putin continued in his remarks,

[I]t is impossible to sanction the appearance of new, destabilizing high-tech weapons…a new area of confrontation, especially in outer space. Star wars is no longer a fantasy – it is a reality…. In Russia’s opinion, the militarization of outer space could have unpredictable consequences for the international

community, and provoke nothing less than the beginning of a

Plans to expand certain elements of the anti-missile defence system to Europe cannot help but disturb us. Who needs the next step of what would be, in this case, an inevitable arms race?  [2]

The Russian Foreign Ministry officially replied to the Washington AMD announcement at the time in 2007, declaring, “The US intention to deploy missile defense components, which will become strategic military facilities in direct proximity to Russian borders, is the source of special concern. We will have to bear in mind the prospective facilities in further Russian military-political steps and military planning. Such plans contradict NATO commitment to restrain the deployment of forces, which was made in the Russia-NATO Founding Act.” [3]

In January 2007, shortly before Putin’s critical remarks in Munich, the Pentagon had announced US plans to deploy an anti-ballistic missile defense system in

Europe. The Pentagon claimed that the deployment was aimed at protecting American and NATO installations against threats from enemies in the Middle East, explicitly Iran, not from Russia.

Following Putin’s Munich remarks, the US State Department issued a formal comment noting that the Bush Administration was “puzzled by the repeated caustic comments about the envisaged system from Moscow.” In further statements, Washington insisted that the European AMD deployment was aimed at the potential threat of an Iranian missile attack on a European NATO country or on the USA itself. As Putin pointed out in his Munich remarks, that made no military sense. “As we say in Russia, it would be like using the right hand to reach the left ear.” [4]

Now, some seven years later, even as Moscow has facililtated a diplomatic solution to both the Syrian and Iran entanglements of Washington, Washington has expanded that AMD ring around Russia to missile sites in Romania, Turkey and Bulgaria as well as Poland and the Czech Republic. Crucial to grasp why Moscow refuses to accept the US missile deployment is what it would do to the balance of peace.

The Russian government lost no time responding  to the recent P5+1 breakthrough between Washington and Tehran on negotiating a diplomatic solution to Iran’s nuclear program. On November 25, Russian Foreign Minister Lavrov told western media in Rome, “If the Iran deal is put into practice, the stated reason for the construction of the defense shield will no longer apply.” [5]

Moscow called Washington’s bluff that its Missile deployment in Europe had been aimed not at Russia but at Iran. Washington was quick to reply.

On December 16, US Defense Secretary Chuck Hagel declared, “the P5+1 Joint Plan of Action, concluded between Iran and P5+1 member states regarding Tehran’s nuclear program, “does not eliminate the need for US and European allies to continue implementing missile defense plans in Europe.” Hagel went on to say, “NATO missile defense efforts pose no threat to Russia,” and urged that both sides continue consultations on future missile plans in Europe. [6] Hagel didn’t bother to explain why the Teheran agreement did not eliminate the US AMD “need.”

To dispense with niceities, Hagel is simply lying.

As the former head of President Reagan’s anti-missile defense Pentagon program, Colonel Robert Bowman told this author in a telephone interview in 2009, the developing US Anti-Missile Defense “shield” around Russia, far from being defensive, is offensive in the extreme. Bowman called the AMD deployment, “the missing link to a First Strike.” [8]

The US is pursuing the possibility of nuclear war with its only present nuclear rival, Russia, as ‘thinkable,’ something that is really and truly ‘mad.’

The first nation with a nuclear missile ‘defense’ shield (AMD) would de facto have ‘first strike ability,’ because they would be able to cripple the other’s nuclear retaliation strike by knocking the missiles out of the air. The US nuclear missile defense shield, which had been under top secret development by the Pentagon since the 1970s involves a ground-based system that could respond to a limited missile attack.

There are presently five parts to the US AMD system, including phased array radar installations that could detect a launch of enemy missiles and track them. In theory once the detected missiles had been launched and were confirmed to be targeting the United States or any other specific target, the next phase would be to trigger one or more of the one-hundred interceptor missiles to destroy the enemy ballistic missile before it reached US air space.

Once the US AMD is up and operational around Russia, the temptation by some in the Pentagon and White House (not that any mentally unstable person would ever occupy the White House), to launch a nuclear first strike against Russia’s nuclear arsenal would be overwhelming. That nuclear “primacy” has been the Pentagon’s dream since the 1950’s.

In a March 2006 article in the leading US foreign policy magazine, Foreign Affairs, two senior US military analysts remarked,

If the United States’ nuclear modernization were really aimed at rogue states or terrorists, the country’s nuclear force would not need the additional thousand ground-burst warheads it will gain from the W-76 modernization program. The current and future US nuclear force, in other words, seems designed to carry out a pre-emptive disarming strike against Russia or China.[9]

It’s little wonder then if Russia has or is about to deploy Iskander missiles and take other measures to counter the mad Washington AMD deployment.

[8] Robert Bowman, Lt. Colonel, USAir Force (Ret.), Statement made during a telephone interview with the author, March 15, 2009. Bowman was Director of Advanced Space Programs Development for the Air Force Space Division until 1978. In that capacity, he controlled about half a billion dollars worth of space programs, including the “Star Wars” programs, the existence of which was (at that time) secret.