What really happened to Ariel Sharon?

Yesterday Israeli medical officials announced that 85 year old Sharon’s condition has deteriorated. According to the BBC, Professor Zeev Rotstein, of the Sheba Medical Centre near Tel Aviv, said on Friday: “Tests show a slow, gradual deterioration in the functioning of his vital organs… His state has not changed. He’s still in critical condition, and his life is in danger.”

Few are aware, however, that in the twilight of his public life, the former Israeli PM gave a speech which potentially could have changed the course of Israeli-Palestinian relations, but instead faded into the background of the political stalemate static indicative of negotiations which have achieved nothing since they began in earnest over 20 years ago.

In a Zionist context, to have Ariel Sharon – an aggressive operator and war hero, known to Arabs simply as “The Butcher”, say what he said – was almost unthinkable at the time:

Did Ariel Sharon have a political, or spiritual epiphany in his final consciousness days? His comments must have rocked the Zionist establishment at the time.

Aside from many delegates getting up and walking out of the press conference in open disgust, pay close attention to the angry expressions from Benjamin Netanyahu as Sharon effectively reverses 40 years of Israeli expansionist and ethnic cleansing policy in one swoop…

Certainly, it was no shock to anyone familiar with Sharon’s love of rich cuisine and fine Russian vodka – that his lifestyle posed some severe health risks. At 5’7″ and 250 lbs he certainly wasn’t the picture of health, and on January 13, 2006 he finally slipped into a coma following a severe brain hemorrhaging incident. 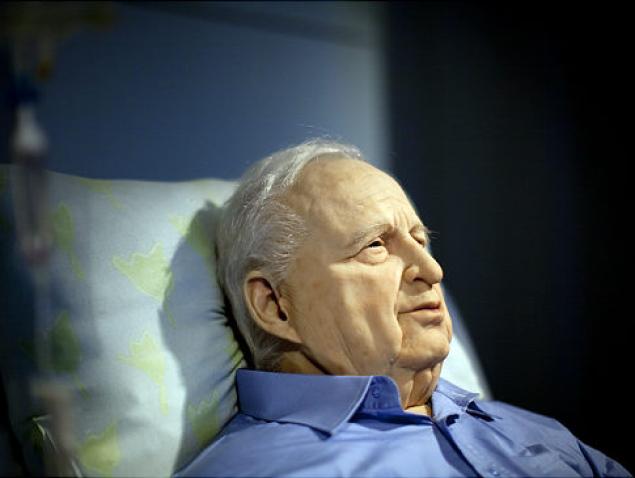 It’s reported that he’s been on life-support ever since, although media coverage and images of the former Likud-Kadima Israeli PM has been nonexistent.

One of the only available depiction it seems of Sharon in a coma has been provided by Israeli artist Noam Braslavsky, whose art installation depicts Sharon in a blue shirt, propped up in a hospital bed with an IV drip attached to his arm. See the BBC Arabic coverage of Braslavshy’s creepy installation here:

Still, no sign of Sharon himself. It brings up a few fair questions as to why this Madame Tussauds-style wax figure is really being filmed here. To fill the curious media gap surrounding Sharon?

Dummy or no dummy, the other question is why would he be kept on life-support for so long?

A strange series of events for sure.

1 thought on “What Really Happened To Israeli PM Ariel Sharon?”