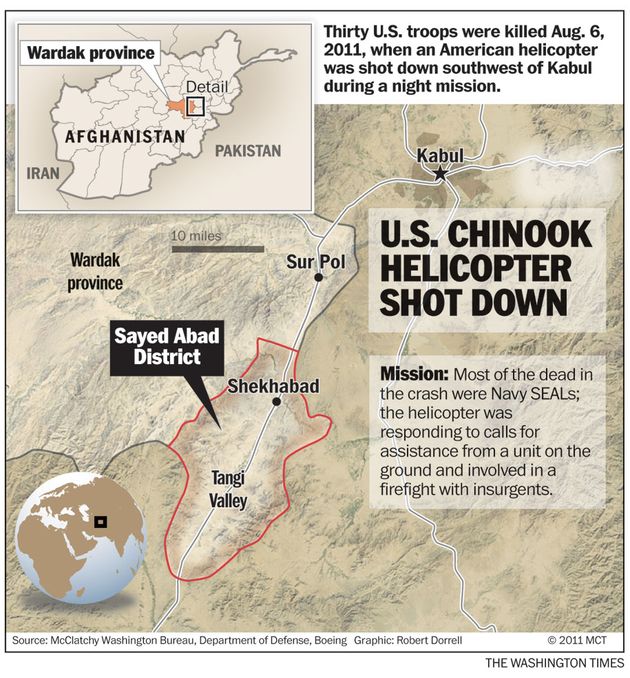 Questions haunt the families of Extortion 17, the 2011 helicopter mission in Afghanistan that suffered the most U.S. military deaths in a single day in the war on terrorism.

The investigative file made available to The Washington Times shows that the helicopter’s landing zone was not properly vetted for threats nor protected by gunships, while commanders criticized the mission as too rushed and the conventional Chinook chopper as ill-suited for  a dangerous troop infiltration.

Every day, Charlie Strange, the father of one of the 30 Americans who died Aug. 6, 2011, in the flash of a rocket-propelled grenade, asks himself whether his son, Michael, was set up by someone inside the Afghan government wanting revenge on Osama bin Laden’s killers — SEAL Team 6.

“Somebody was leaking to the Taliban,” said Mr. Strange, whose son intercepted communications as a Navy cryptologist. “They knew. Somebody tipped them off. There were guys in a tower. Guys on the bush line. They were sitting there, waiting. And they sent our guys right into the middle.”

Doug Hamburger’s son, Patrick, an Army staff sergeant, also perished when the CH-47D Chinook descended to a spot less than 150 yards from where armed Taliban fighters watched from a turret.

He asks why the command sent his son into Tangi Valley toward a “hot landing zone” in a cargo airship instead of a special operations helicopter. The souped-up choppers — the MH-47 and the MH-60 Black Hawk, which SEAL Team 6 rode the stealth version of to kill bin Laden — are flown by Night Stalker pilots skilled in fast, ground-hugging maneuvers to avoid detection.

“When you want to fly them into a valley, when you’ve got hillsides on both sides of it with houses built into sides of the valley, that is an extremely dangerous mission,” Mr. Hamburger said. “The MH, the new model, they’ve got radar that will pick up an incoming missile or incoming RPG. They’re faster. They’re quicker on attack. They’re more agile. So there was every reason in the world to use the MH that night.”

Sith Douangdara, whose 26-year-old son, John, was a Navy expeditionary specialist who handled warrior dog Bart, said he has lots of unanswered questions.

Not all families believe the fact-finding investigation, conducted by Army Brig. Gen. Jeffrey Colt covered all issues. Gen. Colt, who has since been promoted to major general, told commanders that his job was not to find fault and his report did not criticize any person or decision.

A spokesman for U.S. Central Command, which overseas the war and conducted the probe, declined to answer the families’ questions and referred a reporter to Gen. Colt’s report.

More than two years later, more answers may be forthcoming.