We did and do not have adequate robots for the Fukushima disaster, …

… but hey, killer robots are exactly what we need! 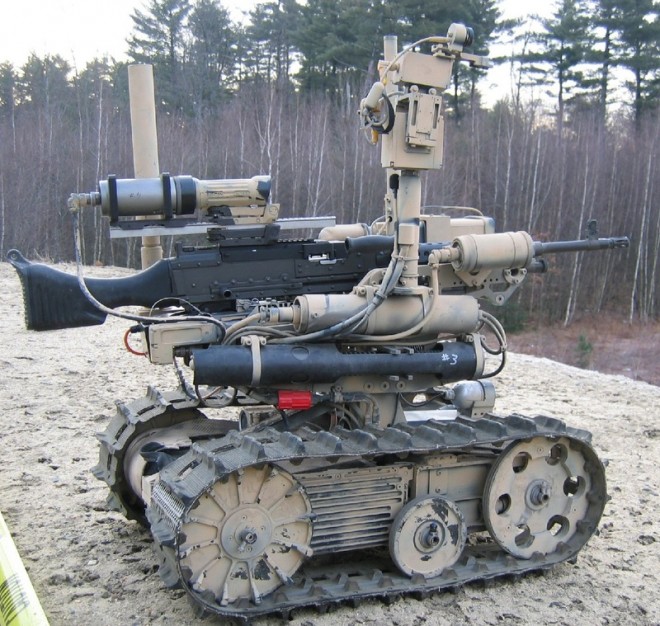 Robots armed with automatic weapons, anti-tank missiles and even grenade launchers are marching, er, rolling ever closer to the battlefield now that they’ve shown they can actually hit what they’re supposed to.

Four robotics companies — HDT Robotics, iRobot, Northrop Grumman and QinetiQ — recently ran their M240 machine gun-armed robots through a live-fire demo at Fort Benning in what has been dubbed the “Robotic Rodeo.” The point was to give the brass a chance to see just how viable such systems are.

The Army, which issued a favorable assessment of the technology last week, doesn’t see our armed robotic overlords as weapons taking the place of boots on the ground, but rather as combatants working alongside troops in the field.

“They’re not just tools, but members of the squad. That’s the goal,” Lt. Col. Willie Smith, chief of Unmanned Ground Vehicles at Fort Benning told Computerworld. “A robot becoming a member of the squad, we see that as a matter of training.”

Senior Army officers attending the rodeo appeared satisfied with the robots after seeing them accurately hit targets 500 feet away, and they hope to see battle ‘bots in action within five years.

“We were hoping to see how they remotely control lethal weapons,” said Smith. “We were pleased with what we saw here. The technology is getting to be where it needs to be.”

This isn’t the first time the Pentagon has played with weaponized robots, but earlier experiments proved such machines weren’t ready for primetime after some of them moved without commands.

Northrop Grumman’s CaMEL (Carry-all Mechanized Equipment Landrover), among the armed robots at the rodeo, can be fitted with automatic weapons, anti-tank missiles and grenade launchers. It can run for more than 20 hours on 3.5 gallons of fuel, according to the company, and carry a load of 1,000 pounds. It also can produce power to charge batteries or power other systems.

“CaMEL is a multifunction platform that can quickly transform from supporting troops to protecting troops as an armed wingman, increasing the firepower of dismounted platoon and company maneuver units,” said Phil Coker, director of the Integrated Platform Solutions business at Northrop Grumman’s Information Systems sector, in a statement. “Its hybrid engine allows the armed CaMEL to operate very quietly – a real plus on the battlefield – and travel farther to provide firepower where it’s needed.”

To see this baby in action, check out this video: