Everybody should know about these (satanic) paedophile rings, involving the highest levels of government & society (all the way up to the Illuminati) and help finding ways to end those atrocities.

– Conspiracy Of Silence: Child Sex Rings By The Rich And Powerful (Documentary)

And yes, they’ve killed Ted Gunderson for speaking out (also about chemtrails: here and here & terroism and 9/11: here): 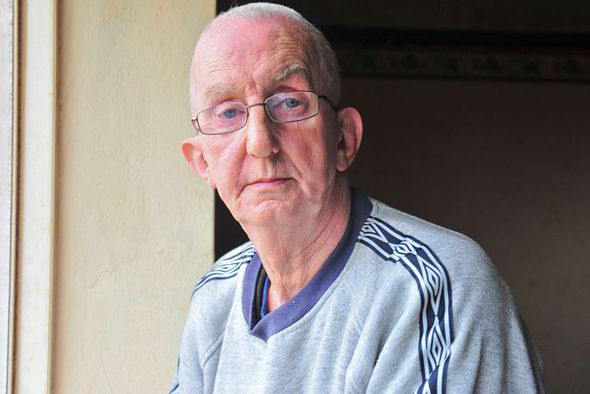 “People seem to forget that Special Branch could do what they liked, they were a law unto themselves”
– Chris Fay

A FORMER child protection officer claimed last night a Special Branch detective held a gun to his head to stop him investigating a VIP paedophile ring.

Chris Fay said he was pinned to a wall and throttled before being given a chilling warning to “back away” from allegations surrounding the notorious Elm Guest House in Barnes, south-west London.

Young boys in care were allegedly taken there in the Eighties to be abused by high-profile MPs and other powerful establishment figures.

Mr Fay, who worked for the now-defunct National Association of Young People In Care, accused the Metropolitan Police of acting like “gangsters” when news of the scandal broke in 1990. He revealed how some Special Branch members routinely threatened him and his colleagues and even victims over a three-month period of intimidation.

His shocking claims come as West Yorkshire Police faces accusations that the force protected paedophile Jimmy Savile.Mr Fay, 67, of south London, said: “It became very dangerous. People seem to forget that Special Branch could do what they liked, they were a law unto themselves.

“At one point they had me up against a wall by my throat with a gun at my head telling me in no uncertain terms that I was to back away if I knew what was good for me.

“A colleague of mine had the same treatment, as did a number of the volunteers. Victims who were actually abused at Elm House were also physically stopped from coming to speak to us at the NAYPIC office in north London.

“I witnessed Special Branch officers manhandling them and turning them away with a warning to keep their mouths shut. It was blatant, it was open, they were acting like gangsters.

“In the end we had to meet victims at a local community centre without the knowledge of the police to hear what they had to say.” NAYPIC was given the identities of senior politicians who formed part of an alleged paedophile ring at the heart of government.

However, Mr Fay said: “I was told by the police implicitly, ‘We do not want you to come to us with big names’.”

In a sinister twist, he said his kitchen window was shot at, leaving three bullet holes in the glass, although he never found out who was responsible.

In 1982 Elm Guest House was raided by the vice squad but allegations of child abuse were never followed up.

Operation Fernbridge is now investigating the claims and two men have been charged with sexual offences.

Last night campaigner Bill Maloney, of Pie & Mash Films, who has helped raise awareness of abuse survivors and corruption, said: “These police cover-ups to protect the wealthy and the powerful need to stop now.

– Conspiracy Of Silence: Child Sex Rings By The Rich And Powerful (Documentary)

– Catholic priest, 84, receiving oral sex from a choirboy in front of a local church altar caught on video