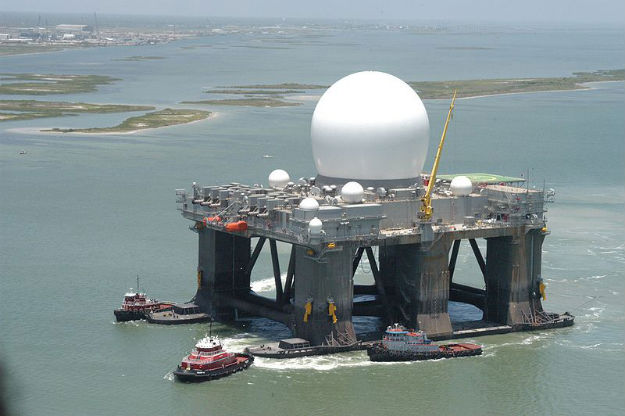 The Pentagon pumped billions of dollars into contractors’ bank accounts on the eve of the U.S. government’s shutdown that saw 400,000 Defense Department employees furloughed.

All told, the Pentagon awarded 94 contracts yesterday evening on its annual end-of-the-fiscal-year spending spree, spending more than five billion dollars on everything from robot submarines to Finnish hand grenades and a radar base mounted on an offshore oil platform. To put things in perspective, the Pentagon gave out only 14 contracts on September 3, the first workday of the month.

Here are some of the more interesting purchases from Monday’s dollar-dump.

First up: the Defense Logistics Agency, the Pentagon branch that provides the armed services with things like fuel and spare parts. DLA has the honor of dropping the most cash in one contract last night with the $2.5 billion award it gave to aircraft engine-maker Pratt & Whitney for “various weapons system spare parts” used by the Army, Navy, Air Force and Marines. Other highlights of DLA’s last-minute spree included: $65 million for military helmets from BAE Systems, $24 million for “traveling wave tubes” to amplify radio signals from Thales, $17 million for liquid nitrogen, $15 million for helium and $19 million on cots. Yes, cots.

Then came the Navy. The sea service spent hundreds of millions of dollars on 31 contracts buying everything from high-tech Finnish hand grenades to janitorial services.

The service’s biggest contracts were aimed at protecting ships from underwater attack. It gave Lockheed Martin a total of $139 million for sonar that allows Arleigh Burke-class destroyers to detect submarines and underwater mines. The Navy is also buying $40 million worth of hand grenades made in Vihtavuori, Finland, that allow “users to choose the level of blast needed for the situation.” Another $18 million is going to Phoenix International Holdings to operate a robot submarine called the Submarine Rescue Diving and Recompression System that can save people from disabled subs sitting up to 2,000 feet underwater.

Not everything the Navy spent its end of year cash on was high tech, however. The service also gave $64 million contract to build a new fuel pier in Point Loma, Calif. It also added $9 million onto an existing $138 million contract for janitors at Navy medical centers in San Diego.

The Air Force, traditionally DOD’s biggest spender, was relatively restrained; it dished out only 17 contracts. One of the big themes of the Air Force’s spend was spying. The service spent cash on everything from spy satellites to drones to planes that can be used to hunt drug dealers.

The air service gave General Atomics $49 million to help France buy 16 MQ-9 Reaper drones. It also dished out $64 million to Lockheed for help operating spy satellites that are equipped with infrared cameras. Another $9 million went to URS Corp. for maintenance work on the Air National Guard’s fleet of RC-26B spy planes that help domestic law enforcement agencies catch drug dealers. Johns Hopkins University got $7 million from the Air Force Research Lab to develop software that can monitor raw communications signals and images collected around the world to detect significant “events” in real time. $8 million is going to a company called McCrone Associates to analyze particles in order to ensure someone is complying international ban on nuclear weapons tests. It doesn’t say who that someone is or what type of particles are being analyzed.

The service also spent $9 million on a new gym at the Air Force Academy that includes areas for CrossFit training, space for the academy’s Triathlon Club and a “television studio.”

The Army only had a couple of relatively large contracts last night. The first was a $600 million award spread out between nine companies to develop alternative energy projects for the Army Corps of Engineers. The ground service also spent $200 million on for Interceptor-brand body armor made by Federal Prisons Industries for sales to other countries. In addition to these deals, the service gave out plenty of relatively small contracts — and relatively is an important word here — for everything from renovations on a reserve center in New Jersey to the purchase of 60 Mercedes Benz trucks for African countries.

Finally, U.S. Special Operations Command got in on the spending last night, giving out one $49 million contract to Boeing for development work on an upgraded version of the Army’s MH-6 Little Bird chopper.

This goes to show that even when the federal government is shutdown and the military has temporarily lost half its civilian workforce, the Pentagon can spend money like almost no one else.