– FDA Import Alert: U.S. bans agricultural and fishery products from 14 prefectures in Japan due to Fukushima radionuclides — Top Newspaper: Concern over contamination is spreading to most countries around Pacific (ENENews, Sep 28, 2013):

Dong-A Ilbo, Sept. 28, 2013 (Korea’s top newspaper): […] Concerns over Japan’s radioactive contamination and its seafood is spreading to most countries in the Pacific basin. The United States has recently banned agricultural and fishery imports from 14 prefectures in Japan, up from eight. South Korea puts a similar ban on fishery imports from eight prefectures, while China and Taiwan does so for 10 and five prefectures, respectively. [… The IAEA’s] upcoming probe needs to shed light on the cause and situation of soil and sea water contamination. […] It would be much better if experts from South Korea, the United States and China participate in the investigation. It is natural for a global organization to intervene in an international issue. […] 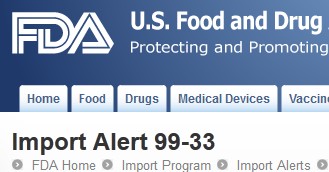 FDA Import Alert 99-33, Sept. 9, 2013: Detention Without Physical Examination of Products from Japan Due to Radionuclide Contamination […] NOTE: Revision to this Import Alert dated September 9, 2013 adds multiple products to the list of products restricted by the Government of Japan […] Previous revisions to this Import Alert dated March 23, April 12, April 14, April 20, April 21, May 9, June 13, July 6, October 21, 2011, February 1, 2012 and July 25, 2012 provided updates to the products and/or prefectures subject to detention without physical examination. […] The Fukushima Daiichi nuclear plant houses several nuclear reactors that have posed signs of a potential threat of radiological contamination to the surrounding areas. Due to the public health concerns that are associated with radiation and nuclear contamination, FDA has increased surveillance of regulated products from Japan. […] Guidance: Districts may detain, without physical examination, the specified products from firms in the ***Fukushima, Aomori, Chiba, Gumna, Ibaraki, Iwate, Miyagi, Nagano, Niigata, Saitama Shizuoka, Tochigig, Yamagata and Yamanashi prefectures.*** […] FDA will continue monitoring the public health risks due to radionuclide contamination, and when appropriate will remove the Import Alert and resume routine coverage of entries. […]