Remember when we said Tepco has lost all control of Fukushima? We weren’t joking.

#TEPCO: “It can’t be denied” there could be several fresh radioactive water leaks at #Fukushima-1. Doses up to 1800 mSv/hr detected on site.

Perhaps the above, together with the terminal demographic social collapse, coupled with Abe’s monetary experiment which will end in currency collapse, explains why for Japanese society, for which pretty much nothing matters anymore as a “happy ending” is out of picture, Syria is merely an opportunity to rerun the more glorious moments of WW II:

Unclear if Manchuria is next.

As posted here over a week ago, this is what is really going on:

After a self-imposed gag order by the mainstream media on any coverage of the Fukushima disaster (ostensibly the last thing the irradiated Japanese citizens needed is reading beyond the lies of their benevolent government, and TEPCO, and finding out just how bad the reality is especially since the key driver behind Abenomics is a return in confidence at all costs), the biggest nuclear catastrophe in history is once again receiving the attention it deserves. This follows the recent admission by TEPCO of the biggest leak reported at Fukushima to date, which forced the Japanese government to raise the assessment of Fukushima from Level 1 to Level 3, even though this is merely the catalyst of what has been a long and drawn out process in which Tepco has tried everything it could to contain the fallout from the exploded NPP, and failed. And today, in a startling and realistic assessment of Fukushima two and a half years after the explosion, the WSJ finally tells the truth: “Tepco Has Lost Control.”

Here is how the mainstream media, in this case the Wall Street Journal, catches up with a topic covered extensively in the “alternative” media for the past several years:

“This is what we have been fearing,” said Shunichi Tanaka, chair of Japan’s Nuclear Regulation Authority, answering questions about the leak at a news conference. “We cannot waste even a minute” to take action.

Behind the leak is a more serious problem: During the past few months it has become clear that Tepco has lost control over the flow of water at the plant and that the problem is escalating, nuclear experts say.

Every day, the utility has to find a place to store around 400 tons of contaminated water that it pumps out of the radioactive reactor buildings, and Wednesday it warned that it is fast running out of space. Storage tanks set up on the fly during plant emergencies have started springing leaks, and Tepco can’t replace them with sturdier ones fast enough. Groundwater-contamination levels are spiking at the seaward side of the plant, and water is flowing into the ocean past a series of walls, plugs and barriers that have been flung up to impede its passage.

That lack of control is a big liability, said Kathryn Higley, a specialist in the spread of radiation and head of the Department of Nuclear Engineering and Radiation Health Physics at Oregon State University, who spent a week in Fukushima earlier this year.

“You have to find ways to control water coming through the site,” Ms. Higley said. “With any sort of accident, you want to control the timing of what’s released and when it gets released.”

So far, the levels of radioactivity that have escaped to the outside remain relatively low, but some experts warn they may not stay that way—particularly as equipment ages and the heavy-duty work of dismantling the damaged buildings and removing the melted fuel rods proceeds. The radioactivity of the water in the most recent leak was so high that workers couldn’t get close enough to search for the cause until the remaining fluid in the tank was removed.

Tepco said it doesn’t think that water has flowed into the sea but can’t say for sure. Some of the flooded reactor basements are similarly too hot to approach, and it is still not clear where the melted fuel cores are, or in what state.

The last statement bears repeating: “it is still not clear where the melted fuel cores are.” Well as long as TEPCO is 100% confident there are no uncontrolled chain reactions taking place… Then again hundreds of tons of coolant must be cooling something.

“In the future there might be even more heavily contaminated water coming through,” said Atsunao Marui, head of the groundwater research group at Japan’s National Institute of Advanced Industrial Science and Technology and a member of a blue-ribbon panel set up in May to figure out ways of managing the radioactive water. “It’s important to think of the worst-case scenario.”

Indeed the “worst-case scenario” is an appropriate topic because as covered here over the weekend, it involves the potential death of millions of largely oblivious Japanese citizens.  As for the long overdue mea culpa by a nationalized TEPCO, which also speaks for the entire Japanese government, it sounds hollow at best and makes one wonder what else is left unsaid.

Mr. Marui and others say the biggest reason for the scramble now is that Tepco—and the government bodies that oversee it—weren’t planning far enough ahead and waited too long to respond to problems they should have seen coming long ago.

“They’re only responding after the fact—they’re not thinking ahead,” said Hajimu Yamana, a professor of nuclear engineering at Kyoto University who earlier this month was named chair of a new institute charged with helping develop measures to tackle the longer-term work of dismantling the plant. “As an expert, I was watching it with frustration.”

“We have not remained idle, but we admit that we have been reactive,” Zengo Aizawa, Tepco executive vice president for nuclear public relations, said at a news conference Wednesday, during which the company was grilled about the leak. “We are very, very sorry for causing concern.“

The concerns are piling up. Earlier today Reuters reported that TEPCO “admitted to new spots of high radiation had been found near storage tanks holding highly contaminated water, raising fear of fresh leaks as the disaster goes from bad to worse.”

Although no puddles were found nearby and there were no noticeable changes in water levels in the tanks, the possibility of stored water having leaked out cannot be ruled out, a Tokyo Electric spokesman said.

The bottom line, and what has become painfully clear, is that Japan simply can’t fix the problem. Even China has now figured it out.

China said it was “shocked” to hear contaminated water was still leaking from the plant, and urged Japan to provide information “in a timely, thorough and accurate way”.

What is strangest of all is that the Japanese people are far less concerned about the government’s cover up. Oh well: they have their distractions – like a plunging currency, and (transitorily) soaring stock market, in nominal terms of course.

Finally the following four charts from the WSJ provide a full breakdown of the current state of play at the devastated nuclear power plant. 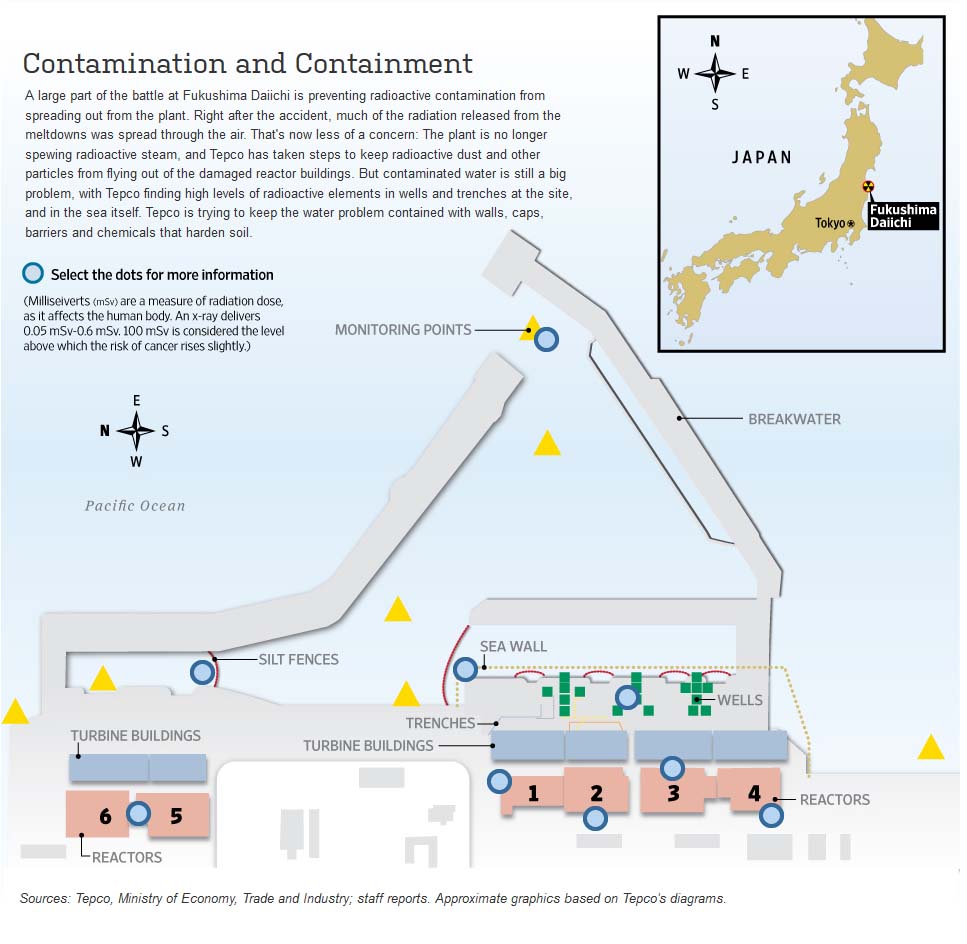 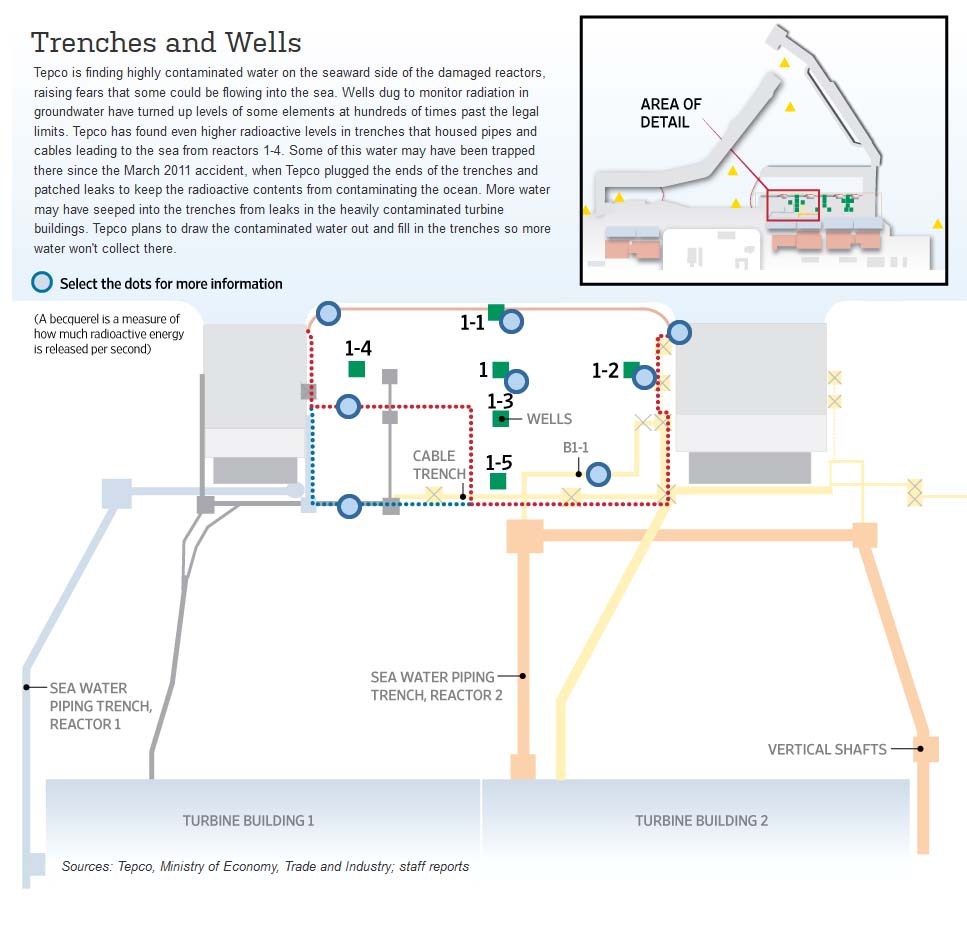 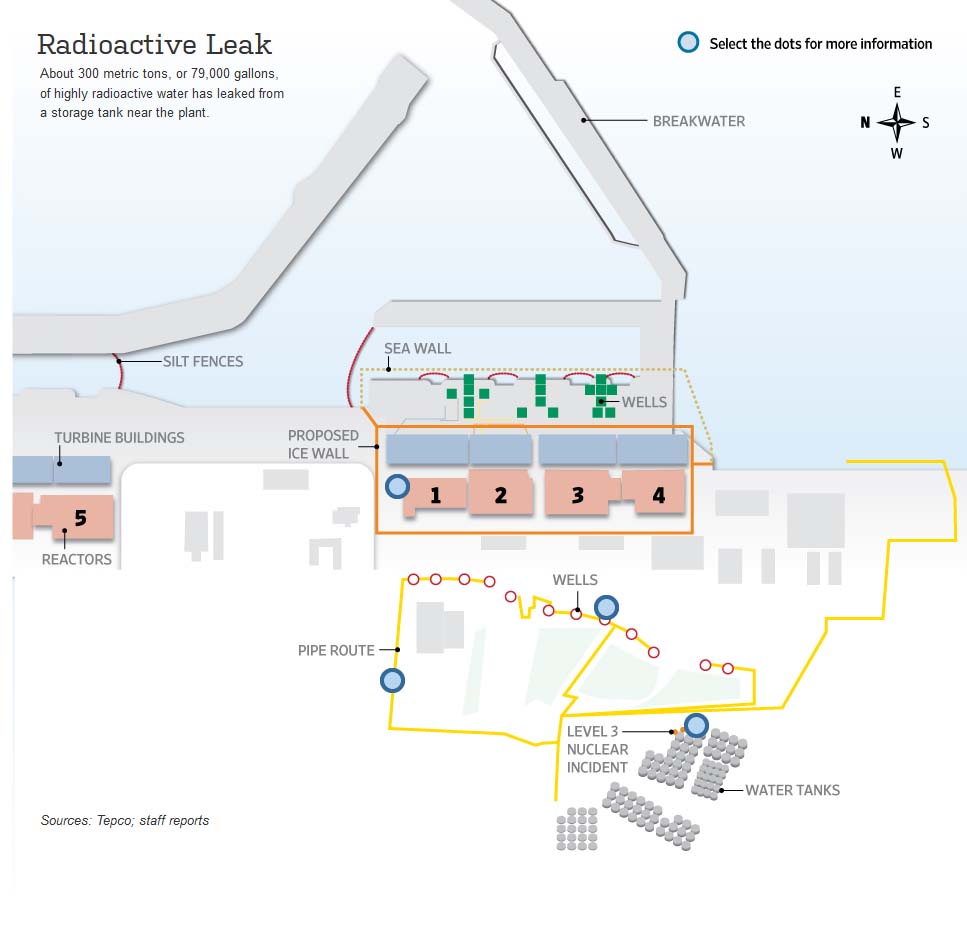 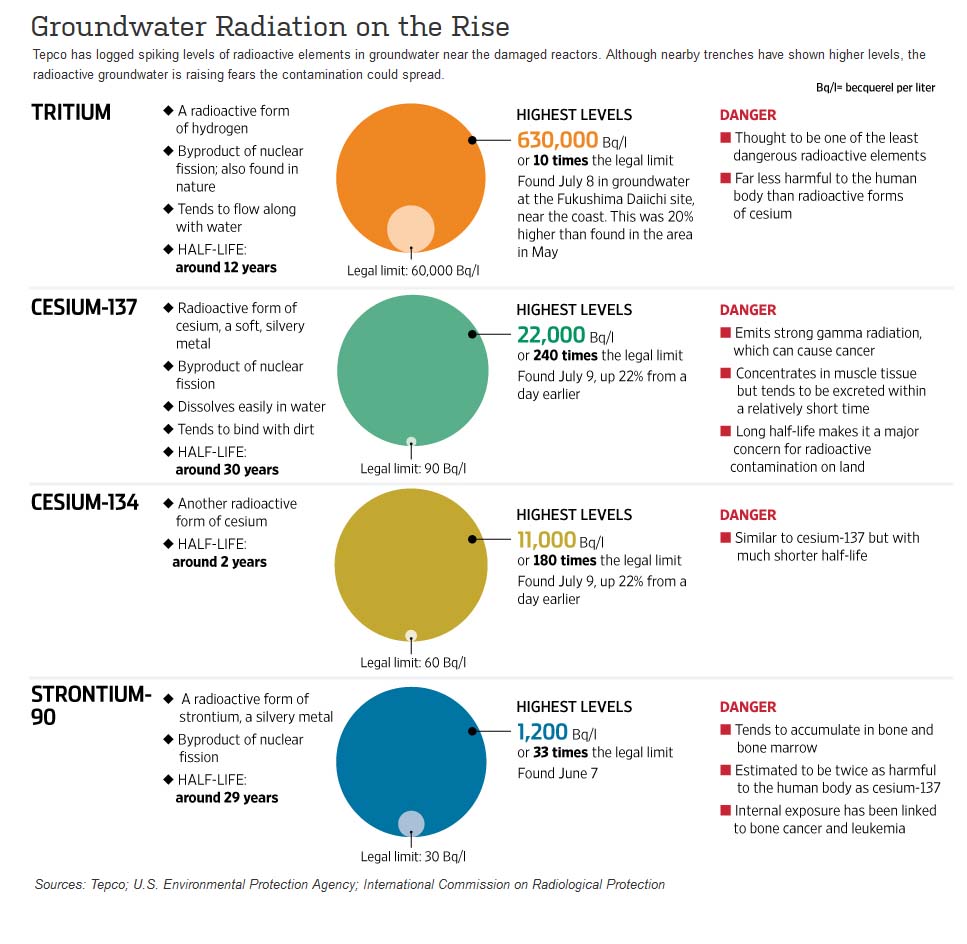