A firestorm broke out during the weekend over the latest part-timing impact from Obamacare (covered here extensively previously), this time in the form of a leaked memo by retailer Forever 21, which announced that some employees would be demoted to part-time status. The memo, which announced forcible part-time changes would take place on August 18 with full loss of benefits to take place by August 31, was leaked by a disgruntled employee on their Facebook page.

The highlight from the memo:

Company-wide, Forever 21 recently audited its staffing levels, staffing needs and payroll in conduction with reviewing its overall spending budget. As a result, we are reducing a number of full-time non-management positions…. As a Part-Time employee your regular schedule will not exceed 29.5 hours per week.

As is well known, with the ACA mandating companies who employ 50 full-time workers or more to provide health insurance coverage, one much exploited loophole is to cut full-time workers to part-time status, i.,e., have them work less than 30 hours. Or 29.5 hours in this case. Following this forcible full-time demotion, employees will lose medical, dental, vision and voluntary coverage on Aug. 31 and will no longer accrue paid time off.

The memo is below: 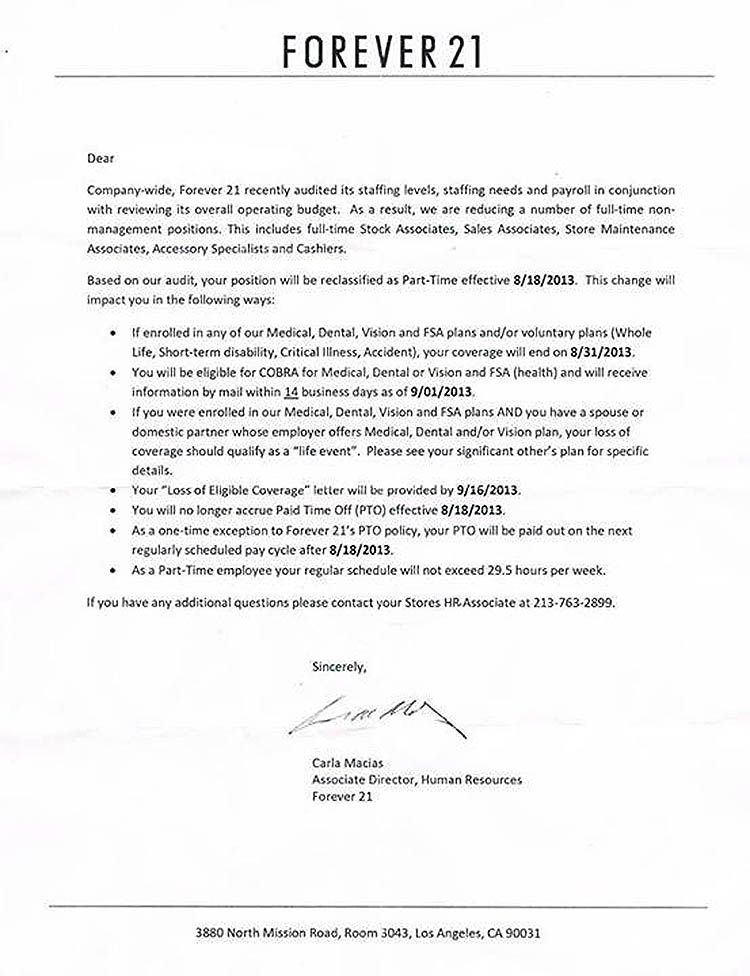 Forever 21’s prompt response to understandable fury by the confused broader public: it only impacts a tiny 1% of all employees and is in no way related to the “Affordable” Care Act.

Thank you for reaching out Jessy. Forever 21, like all retailers, staffs its stores based on projected store sales, completely independent of the Affordable Care Act. After a recent evaluation, Forever 21 realigned its staffing needs to better reflect sales expectations. This realignment impacted less than 1% of all U.S. store employees. Forever 21 values all of its employees and made every effort to affect as few employees as possible in this realignment.

And since there is no way to independetly verify the veracity of the statement, one should accept it on pure faith. Like most other things these days.

3 thoughts on “Obamacare Strikes At Forever 21 Which Forcibly Demotes Some Workers To 29.5 Hours Per Week”