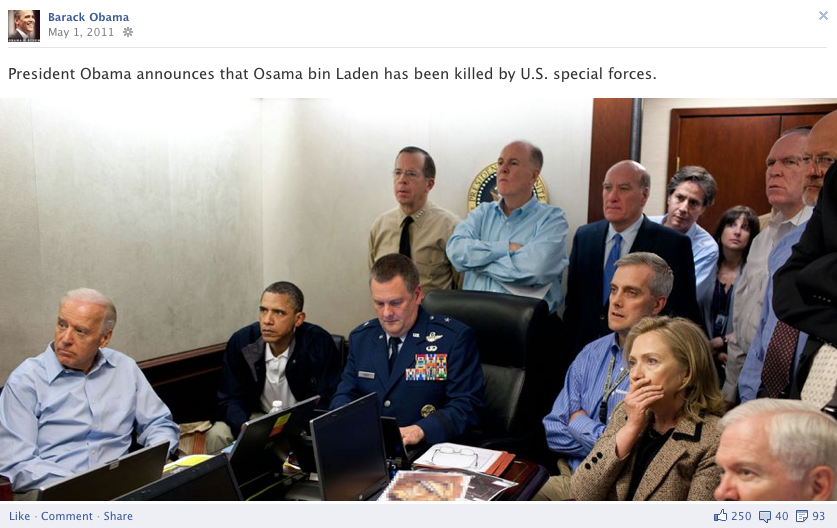 So what exactly were these clowns watching?

The Osama Bin Laden raid was suspect from the very beginning.  Not only were key initial descriptions of the assault completely incorrect (such as him being armed and his wife being killed), but the manner in which his body was rapidly tossed into the ocean was beyond bizarre.  I mean, Tony Soprano keeps a body longer than that.

Well it seems the “most transparent administration ever” has made sure that the American public never receives any information beyond the propaganda of Zero Dark Thirty.

From the Associated Press:

WASHINGTON (AP) — The nation’s top special operations commander ordered military files about the Navy SEAL raid on Osama bin Laden’s hideout to be purged from Defense Department computers and sent to the CIA, where they could be more easily shielded from ever being made public.

The secret move, described briefly in a draft report by the Pentagon’s inspector general, set off no alarms within the Obama administration even though it appears to have sidestepped federal rules and perhaps also the Freedom of Information Act.

But secretly moving the records allowed the Pentagon to tell The Associated Press that it couldn’t find any documents inside the Defense Department that AP had requested more than two years ago, and could represent a new strategy for the U.S. government to shield even its most sensitive activities from public scrutiny.

McRaven’s directive sent the only copies of the military’s records about its daring raid to the CIA, which has special authority to prevent the release of “operational files” in ways that can’t effectively be challenged in federal court. The Defense Department can prevent the release of its own military files, too, citing risks to national security. But that can be contested in court, and a judge can compel the Pentagon to turn over non-sensitive portions of records.

The AP asked the Defense Department and CIA separately for files that included copies of the death certificate and autopsy report for bin Laden as well as the results of tests to identify the body. While the Pentagon said it could not locate the files, the CIA, with its special power to prevent the release of records, has never responded. The CIA also has not responded to a separate request for other records, including documents identifying and describing the forces and supplies required to execute the assault on bin Laden’s compound.

McRaven’s unusual order would have remained secret had it not been mentioned in a single sentence on the final page in the inspector general’s draft report that examined whether the Obama administration gave special access to Hollywood executives planning a film, “Zero Dark Thirty,” about the raid. The draft report was obtained and posted online last month by the Project on Government Oversight, a nonprofit watchdog group in Washington.

The refusal to make available authoritative or contemporaneous records about the bin Laden mission means that the only official accounts of the mission come from U.S. officials who have described details of the raid in speeches, interviews and television appearances. In the days after bin Laden’s death, the White House provided conflicting versions of events, falsely saying bin Laden was armed and even firing at the SEALs, misidentifying which of bin Laden’s sons was killed and incorrectly saying bin Laden’s wife died in the shootout. Obama’s press secretary attributed the errors to the “fog of combat.”