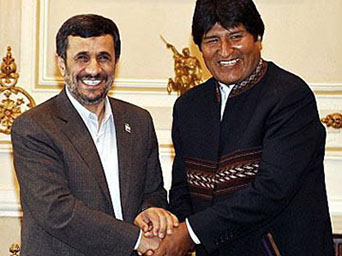 In 1999, its authorities issued an arrest warrant. It cited this attack and the 1994 AMIA (Argentine Israelite Mutual Association) Buenos Aires bombing. It killed 85 and injured hundreds. Argentina has Latin America’s largest Jewish population. It numbers around 200,000.

Alberto Nisman’s 502 page indictment falsely linked Iran to the 1994 incident. It did so duplicitously. More on that below.

He fabricated Iran’s so-called “dual use of diplomatic offices, cultural or charity associations and even mosques, as coverage to hide illegal activities.”

He claimed the 1994 incident wasn’t “an isolated event.” It’s “part of a bigger image, dominated by the strong and aggressive Iranian infiltration in the region in which Rabbani did not limit himself to Argentina.”

(B)ased on the gathered evidence, his activities (extended) to Guyana and to several South American countries.”

“Based on countless reports, evidence, testimonies, court and investigative records related to other countries of the region, North America and Europe – including rulings of foreign courts against the Iranian regime – (his activities supposedly) proved the identical decision-making mechanism, planning and execution of terrorist attacks verified in different countries, which were judicially attributed to Iranian intelligence agents.”

He alleged so-called “documents signed by top authorities in Iran” prove his accusations.

“I have the certainty that this is irrefutable proof,” he claimed. “Any prosecutor who sits in my office will reach the same conclusions because evidence leads to that. Iran is a terrorist state that backs them.”

He asked Interpol to “take further measures in order to detain all the defendants in the AMIA case with international arrest warrants.”

The Islamic Republic News Agency (IRNA) vehemently denied Nisman’s accusations. It said Tehran has no involvement in Latin American terrorism. It has intention to commit it. No reason to do so exists.

“(D)ue to the prosecutor’s background and Zionist character, we won’t consider his statements important,” IRNA stressed.

Cui bono matters most. Nisman left unaddressed an Iranian motive or interest in Latin American terrorism. What possible purpose could it serve?

Iran’s got everything to lose and nothing to gain. Israel and America benefit hugely. They do so by claiming Iran’s link to incidents bearing their fingerprints globally. They do it on others fabricated out of whole cloth.

Wall Street Journal columnist Mary O’Grady notoriously reinvents Latin American history. She does so her way. Doing it turns truth on its head. It doesn’t wash with reality. She’s been exposed, debunked, and disgraced numerous times.

Her columns repeat lies, damn lies, and vilification of Washington’s enemies. She fronts for wealth and power. She does so disgracefully. She’s paid to do so.

She never had credibility. She doesn’t now. She substitutes her version of history for reality. It reads like bad fiction.

On June 2, she headlined “Uncovering Iran’s Latin Networks.” She cited Nisman’s report. She claimed Tehran “sow(s) revolution all over the world, and Latin America is a key target.”

She called his misinformation “sophisticated (proof of) Iranian terrorismâ€¦.run(ning) from the Caribbean to the Southern Cone.”

She cited Nisman’s outlandish claim of an alleged foiled 2007 Iranian plot to blow up New York’s JFK Airport. He called it similar to the 1994 Argentinian incident.

So-called evidence is easy to concoct. Washington and complicit allies do it repeatedly. Some do under pressure. All do shamelessly.

“The model is not complicated. True believers are placed in legal structures, like embassies, cultural centers, mosques and religious schools, where they carry out official duties but also radicalize converts, collect funds, pass secret communications and otherwise lay revolutionary groundwork.”

Mosques are “dual” purpose, she claims. They serve as “intelligence station(s).” She calls Brazil’s border with Paraguay and Argentina “a famous hideout for Hezbollah.”

Her claims lack credibility. They’re void of corroborating evidence. She can’t include what doesn’t exist. She tries anyway. She misses the mark every time. Baseless claims don’t wash.

“Months after the world’s largest Spanish news network revealed that Middle Eastern terrorists infiltrated Latin America to plan an attack against the United States, the Obama Administration has determined that the groups don’t seem to have a presence in the region though there is growing concern.”

Washington said “no terrorist group targeted US citizens in or from Mexican territory. (N)o evidence of ties between Mexican criminal organizations and terrorist groups” exist.

On May 30, 2013, the State Department again debunked claims about an Iranian-linked Hezbollah/Al Qaeda Latin American terrorist network. “(N)o known operational cells” exist. None do now. None did earlier.

At the same time, the report acknowledges Iranian President Ahmadinejad’s visits to Cuba, Ecuador, Nicaragua and Venezuela. “The United States continues to monitor such initiatives,” it said.

It claimed “Iran provided financial, material, and logistical support for terrorist and militant groups in the Middle East and Central Asia.”

“The IRGC-QF is the regime’s primary mechanism for cultivating and supporting terrorists abroad.”

Accusations persist. They don’t pass the smell test. They stop short of linking Iran to Latin American terrorism. If Washington saw a connection, headline reports would follow. None did post-Nisman. Official silence further debunks his claims.