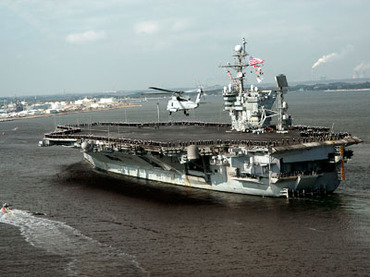 Iran has blamed the US Navy for “illegal and provocative acts” near its coastline, including violations of country’s airspace. Formal accusations of these charges were filed with both the UN chief and the UN Security Council.

The two identical letters to Secretary-General Ban Ki-moon and the UNSC were delivered on Friday by Iran’s envoy to the United Nations, Ambassador Mohammad Khazaee.

He cited several incidents of reported unauthorized flights over the coastal regions around Bushehr in October, where a Russian-built nuclear power plant is located. Khazaee also said that a US drone crossed into Iranian airspace on November 1, despite radio warnings.

Tehran urged Ban to warn the US against “the continuation of acts in violation of international law and of the adverse consequences of any provocative and dangerous acts for which the United States government would be held responsible.”

The White House did not immediately comment on the allegations.

The November 1 incident, the latest mentioned in the complaint, involved two Iranian fighter jets shooting at an American Predator drone. The unmanned aircraft was performing a reconnaissance mission over the Gulf, and returned safely to base after the encounter.

The Pentagon insisted that their aircraft was in international airspace when the Iranian jets engaged it, and that the drone remained over the international waters while in flight. Tehran contested that account, claiming the drone violated its airspace.

Last year, Iran captured an American Sentinel spy drone inside Iranian territory. The capture was touted as a major victory by Tehran, while Western commentators voiced concerns that Iran would be able to study and replicate the drone’s secret stealth technology.

The US maintains a keen interest in Iranian secrets due to the long-running rivalry for influence in the region between the two nations. Washington , along with its enduring ally Israel, claim that Tehran is trying to secretly build a nuclear weapon under the guise of a civilian nuclear program. Iran has steadfastly denied the accusations.

In a bid to stop enrichment of uranium by the Islamic Republic, the US and its allies have levied crippling economic sanctions against the country over the last year, damaging Iran’s energy exports. There were also speculations of a possible military attack on Iranian nuclear facilities by Israel.

Tehran threatened to use its navy to block the Strait of Hormuz, a crucial naval shipping route for oil, in response to such an attack. The US has already further built up its already considerable military strength in the region, saying it is prepared to counteract any Iranian blockade of the strait.