When it comes to the NEW QE, everyone has an opinion, and most seem to believe that the NEW QE will come next week, now that the US economy added “just” 96,000 people (but, but, the unemployment rate ‘fell’). Certainly, and far more importantly, if the most recent FOMC minutes are any guide, the Fed shares this view. Sadly, as so often happens, most, and this includes the FOMC’s various voting members, have once again made up their minds without actually evaluating the limitations posed by simple math. After all it is far easier to form an opinion, and actually think about the underlying facts later. The math, for those who actually have looked at the numbers behind the scenes, is scary (in UBS’ words, not ours).Here is the math.

As part of its Operation Twist, the Fed is buying long-term bonds, and selling short-term (0-3 years) bonds. As we reported in April, the biggest limitation for the Fed is that it is rapidly running out of short-term bonds to sell. There is a fix to this: the Fed will simply have to sell longer dated bonds from its SOMA portfolio, first up to 5 years, then 7, and so on. Of course, this will also force the Fed to extend its ZIRP language by an appropriate amount of time, through 2017, then 2019, and so on (which also means all bets that the Fed will hike any time in the next 5 years will be immediately null and void, and one can position accordingly in the Eurodollar space).

This move, however, will simply permit the Fed to extend Twist 2 beyond its year-end maturity. As a reminder, the primary role of Twist, aside from that stated one which is to keep the curve as flat as possible (i.e., boost housing which as we showed yesterday is not working, as refis have plunged recently despite record low mortgage rates), is to absorb virtually all the long-end supply: after all, it is all about the funding of the US $1 trillion+ annual budget deficit.

Said otherwise, when it comes to the 10-30 year sector the Fed is already monetizing all new issuance. This is part of the entire flow argument which we have been discussing for the past 6 months, and why we, correctly, say that Operation Twist is really QE 3 and QE 3.5 (for the recent extension of Twist). So far so good.

Three weeks ago we presented a video courtesy of Stone McCarthy which showed a timelapse of the “takeover” of the Fed as the primary holder of public debt. For those short on time, here is how the Fed’s holdings portfolio looked like then… 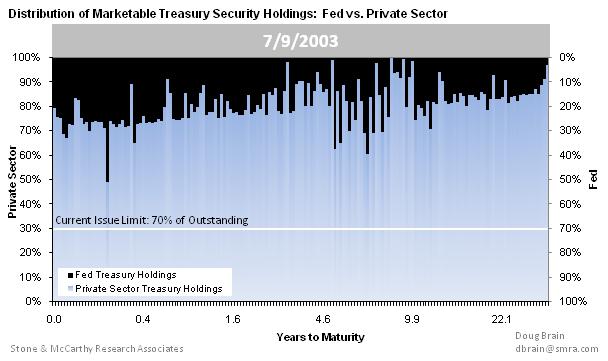 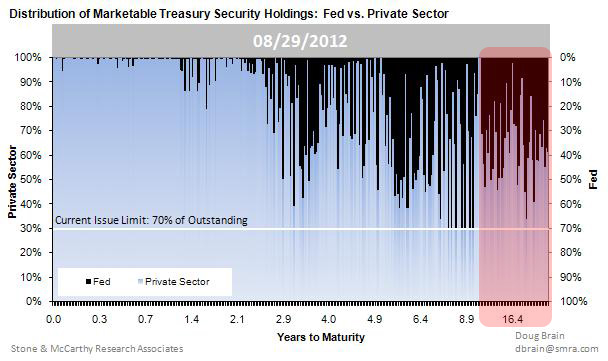 The shaded region is important for two reasons: this is where the Fed will be buying new bonds as part of any new QE Large Scale Asset Purchase program, and it tells us all there is to know about how big and how effective QE3 (really 4) will be. The bottom line, as calculated by UBS’ Michael Schumacher and confirmed by anyone with access to the detail behind the Fed’s SOMA holdings, which incidentally just hit a record 116 months two months ahead of Twist 2 schedule, is that “the Fed owns all but $650 billion of 10-30 year nominal Treasuries.” Also as pointed out above, Twist 2, aka QE 3.5 is already absorbing all of the long end supply. And herein lies the rub. To quote UBS: “Taking out, say, $300 billion in long-end Treasuries almost certainly would put tremendous pressure on liquidity in that market….Ploughing ahead with a large, fixed size QE program could cause liquidity to tank.”

In other words, anyone expecting a full blown LSAP focusing only on US Treasurys will very likely be disappointed as the Fed will certainly realize, quite soon we hope, that it has only $650 billion in total 10 year + bonds available in the entire private market!

Well, perhaps the Fed will just monetize MBS, as Bill Gross has been betting on for nearly a year now. It could do that… but when once factors in “math“, the results are once again quite startling. Quote UBS again:

The alternative of tilting purchases toward MBS implies that the QE program would need to be quite protracted. Monthly supply of conventional 15yr, 30yr and 30yr GNMA has averaged about $85-90 billion over the past year and the Fed is already buying about $25 billion. The Fed might be able to buy another $40 billion without disrupting the market. Assuming that the Fed does a $600 billion program with 75% in MBS, it would need to buy $450 billion in mortgages, so in our estimation the program would need to last nearly a year.

We doubt the market would respond well to that prescription from Dr. Bernanke.

Bottom line, if and when someone does the actual math on what the Fed can do, the results are quite disturbing, as they indicate Ben’s hands are very much tied, and the Chairman no longer can conduct the type of bazooka event that most have expected. It certainly means that the Fed can not engage in anything remotely resembling the $1 trillion LSAP in QE3 (sic) that has been whispered.

Most importantly, all of the above actually confirms our biggest worry: the Chairman is well aware of the math behind this analysis, and is the reason why month after month he has been forced to pull a ‘Girl with the Draghi Tatto‘ and jawbone the market into submission, hoping nobody else does the math on what Bernanke’s real options are, because once the details are out there, and everyone can do the math on their own, only disappointment can follow.

As it turns out, Adam Yogi Berra Smith Dzhugashvili was right: there indeed is no such thing as a free lunch, especially not under central planning.