M2 money supply rose sharply, driving the stock market higher. Now it has peaked and rolled over. That does not bode well for the Bull market.

The primary point is that “real growth,” i.e. rising wages and profits powered by increases in productivity, does not require massive growth of M2. 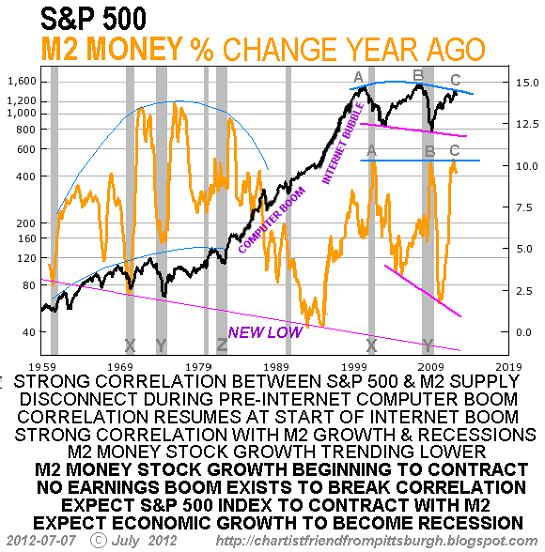 Except during periods of exceptional earnings growth like we had during the pre-internet computer boom when companies like Microsoft, Oracle and Intel were improving business productivity by leaps and bounds, the trend of the stock market (and economic growth in general) tends to closely follow changes in Fed controlled money supply growth.

The outlier earnings growth of the 1980’s and early 90’s PC and database revolution was so strong that the Fed was able to take its foot off the monetary accelerator without causing a corresponding drop in stock prices. Once every business was fully computerized in the mid 90’s the Fed floored it again to support stocks and create the Internet Bubble. Since then every time the Fed has taken its foot off the M2 accelerator the market trend has turned negative and the economy has gone into recession.

That appears to be what is happening right now.

Note the clear correlation of the 1987 crash and the breakdown from a 20-year dome-top of M2 growth that occurred during the late 80’s. The two downtrend lines are parallel on the chart.

Thank you, Chartist Friend from Pittsburgh. As many observers have noted, you can expand the money supply but if that money ends up stashed as bank reserves, it never enters the real economy, nor does it flow into household earnings. The velocity of that “dead money” is near-zero.

M2 declined in the housing bubble as the velocity of money skyrocketed: everyone was pulling money out of housing equity via HELOCs (home equity lines of credit) and spending the “free money” on cruises, furniture, big-screen TVs, boats, fine dining, etc. The recipients of that spending also borrowed and spent as if the “free money” would never end.

If M2 expansion is the only thing propping up an artificial market, what happens to the stock market rally as M2 rolls over?