– ‘Vets Feel Abandoned After Secret Drug Experiments’ (CNN): ‘They Want To Use Young Men As Guinea Pigs And Throw Them Away’

Most United States citizens would opt out of getting vaccines if they understood that natural foods, vitamins, herbs and supplements build up the immune system enough to fight off almost any disease known to mankind. For 70 plus years, the pharmaceutical industry (Big Pharma) has succeeded at its malicious money-making schemes, despite a well-documented history full of horrific lessons.

In 2006, the Public Readiness and Emergency Preparedness Act (PREP) was signed into law by the Bush Administration, giving the U.S. Government the power to declare a “national emergency” for any infectious disease they claim is spreading and therefore require mandatory vaccinations for the entire population of the United States. In other words, U.S. citizens can now be denied their constitutional right of choice and be force-vaccinated or face jail time for being a “threat to national security,” all without trial, and without any legal representation. ( http://www.infowars.com)

Auschwitz, the largest German concentration camp of WWII, was the ideal “guinea pig” testing arena for dangerous pharmaceutical drugs and vaccines created by IG Farben (a very powerful cartel that consisted of German chemical and pharmaceutical companies such as BASF, Bayer, and Hoechst). Jewish prisoners of war would not be able to “sue” the government, so inhumane testing ensued. By vaccinating Jews, homosexuals, and anyone who denied the political views of the Nazi’s (including children), Hitler was isolating his “master race” by sickening, weakening, or killing opposition, with a passive and silent terror campaign through vaccinations and nerve gas. (http://www.holocaustresearchproject.org/economics/igfarben.html)

Nazi Germany wasn’t a conspiracy theory, it was real, but people underestimated the movement as it rose up, and look what happened. Before and during the war, the Nazi’s tested Jews the same way we test and breed animals (including the ones we eat) in the United States today. How are GMO (pesticide-laden) foods which cause cancer so different from pushing dangerous, chemical laden vaccines (like swine and flu shots) on humans? And how similar were the Nazi concentration camp conditions to the conditions we find many animals living in today – trapped in a horror story from birth to miserable death – also known as Concentrated (or Confined) Animal Feeding Operations (CAFOs)?

There is a war going on today for chemical-free food and water, and a war for personal liberties that allow citizens the right tohave GMO foods labeled, and to opt out of vaccinations. It’s been only 70 years since World War II, and the mad scientists didn’t just go away, they went to work for corporations and pharmaceutical companies that run the vaccine and food industries now. Their heirs are continuing the “tradition” of making money by any means, with complete disregard for human sanctity.

Right now in the USA, poisonous foods and vaccines cross over moral and ethical barriers regarding basic humanity and the welfare of mankind. The United States has become a testing arena for Big Pharma’s dangerous vaccines and pharmaceuticals. Ingredients in vaccines include toxins and carcinogens known to cause adverse reactions that are severe and sometimes fatal.

• Most vaccines go virtually untested and success rates are based strictly on results from testing animals in a laboratory.

• Many vaccines contain thimerosal, a preservative made with methyl mercury, which is extremely toxic to the central nervous system.

• Many vaccines contain chemical adjuvants, like squalene, which cause inflammation of the central nervous system.

• Autism is a neurological disorder. Vaccine ingredients break down peptides in the body which regulate the CNS, severely disrupting specific high cognitive functions and processes all characteristic of autism.

• Rates of autism have doubled in past decade.

• More than 1 in every 100 children in the U.S. are diagnosed with autism, which is the highest rate of any population in all of history.

• The main group of scientists who convinced the World Health Organization to declare the H1N1 a “pandemic” had financial ties to the drug companies that profited.

• Australia banned flu vaccines in children after reports of seizures, and Finland banned H1N1 vaccines after linking them to narcolepsy in children.

• Injecting genetically modified bacteria and viruses runs the risk of causing a cytokine storm in the body, which is an exaggerated immune system response to a highly pathogenic invader. When a cytokine storm occurs in the lungs, fluids and immune cells accumulate and eventually block off the airways, often resulting in death.

For most of modern mankind, medical experiments are envisioned as happening in a laboratory environment with use of rats and mice, but modern Western medicine has devolved into a money making scheme which outsmarts the general public and uses them as the mice. Therefore, in the way that Hitler’s evil pharmaceutical regime “flew under the radar” of so many powerful countries, so has allopathic medicine today. 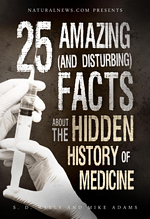 Learn more about the true history of modern medicine in this revealing report. Free downloadable PDF. Covers Nazi connections with Big Pharma, war crimes of Bayer, the weapons origins of prescription medications, the shocking history of psychiatric medicine and much more.