By the time Operation Twist (1) ends in just over 40 days time, on June 30, Fed Chairman Ben Bernanke, according to his previously announced “loose” target, will hope to have extended the average maturity of all bonds in the System Open Market Account (SOMA) to a record of roughly 100 months from 75 month at the onset of the program in October 2011. After all the sole purpose of Twist was to load up the Fed’s portfolio with duration, forcing the rest of the market to shift its investing curve even further into risky assets, as the Fed will have effectively onboarded the bulk of securities in the 3-4% return interval. Now as we showed back in early April, hopes that the Fed will simply continue with Operation Twist 2 after the end of “season” 1, as suggested by some clueless “access journalists” who merely relay what they are told by higher powers, are completely misguided as the Fed simply does not have enough short-term securities (1-3 years) to sell, and would have at most 2 months of inventory for a continued sterilized operation. Which however, does not mean that the Fed can not be quietly ramping up its operations in the ongoing Twisting episode. Because as Stone McCarthy demonstrates, as of the past week, the Fed has already surpassed its 100 month maturity target of 100 months, and is at 102.82 months as of May 16. And this is with 6 more weeks of Twist to go: at the current rate of SOMA purchases, the Fed will have a total portfolio average maturity of just shy of 110 months by June 30! Which means that contrary to market expectations of what the Fed’s own stated goal may have been, Bernanke will have gobbled up nearly 40% more long-dated Flow relative to estimates! In other words, Ben does not need to do a full blown Operation Twist 2 episode: by the time Twist 1 is over, he will have attained nearly 40% of the goals of the next potential sterilized operation.

Why is this important? Well, recall that over a month ago Goldman Sachs itself admitted what we have been saying for over 3 years: it is not stock that matters… it is flow. Recall the Goldman punchline:

…we have found some evidence that at the very long end of the yield curve, where Operation Twist is concentrated, it may be not just the stock of securities held by the Fed but also the ongoing flow of purchases that matters for yields…

And there you have it.

What the finding above means is that the Fed has been ramping risk assets, read the S&P even more than where it should have been, based on simple flow models, and that contrary to market expectations, the S&P500 should have been about 40% lower compared to where it will be on June 30 if the Fed has pursued its stated goal, and targeted solely a 100 month average maturity.

Which has a rather scary implication for the stock market: if and when Ben announces that Twist ends on June 30 with no successor program, stocks will immediately react, and realize that the Fed’s SOMA account holds well more than the expected long-end, and that without further “flow” forcing more 30 year paper into the gaping maw of Bernanke, stocks will have no reason at all to maintain their prior epic surge (all else equal, whcih it won’t be).

It also means that unless Bernanke is willing to see the stock market plunge ahead of the Obama re-election, which he isn’t, or at least the President most certainly isn’t, that the June Fed statement will be quite interesting, as not only will Bernanke have to maintain a program which is now uncovered to have been monetizing the long-end at a rate 40% higher than estimated, but will still have just two more months of capacity left for any potential future sterilized market propping experiments. 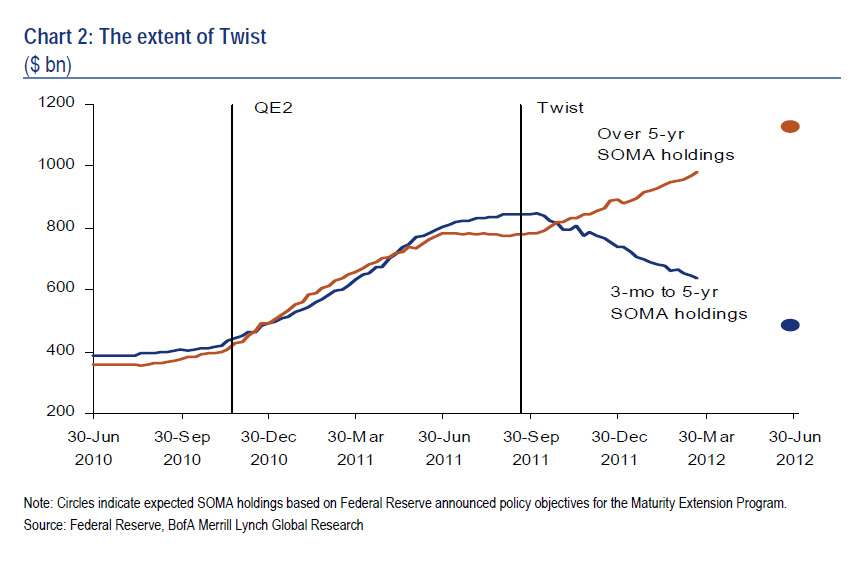 Which only leaves the Fed with one option: that of making Bill Gross, and all those others who are loading up on duration-sensitive securities which will benefit from an LSAP based episode, very, very happy. Of course, the list of such assets most definitely includes gold.