– Chart Of European Emergency Liquidity Back At Record Levels, And Why Bank Of America Is Long French CDS (ZeroHedge, Dec, 21, 2011):

Yesterday we charted the combined ECB balance sheet which showed that it had hit an all time record of €2.5 trillion, exclusing today’s operation (to the stunned surprise of all those who scream that the ECB should be printing more, more, more). Today, we focus exclusively on the various forms of unsecured liquidity measures, such as today’s 3 Year LTRO, because as the following chart from Bank of America shows, European emergency liquidity provisioning post today’s liquidity bailout brings the total to €873 billion and is just shy of its all time record of €896 billion, a number which we expect will be taken out as soon as the next liquidity provisioning operation. In other words, European liquidity in euro terms, has virtually never been worse. And as today’s additional drawdown of Fed swap lines indicates, the USD liquidity crunch is getting worse not better (confirmed by the rapid deterioration in basis swap levels). Perhaps the fact that not only is nothing fixed, but things are about as bad as they have ever been explains why Europe closed blood red across the board, and also why Bank of America continues to push for an outright crash in all risk (and some were doubting our earlier analysis that BAC is outright yearning for a market crash): To wit from Bank of America’s Ralf Preusser: “The tender results do not however change either our longer term  cautious outlook on growth, or the periphery. We remain long 5y CDS protection on France, at 210bp (target 300bp, stop loss 175bp).” So let’s see: BAC is shorting the EURUSD, which implies they are pushing for a market drop, and now they want French CDS to soar? Who was it that said the megabanks do not want a crash?

And here is what near record liquidity needs look like: 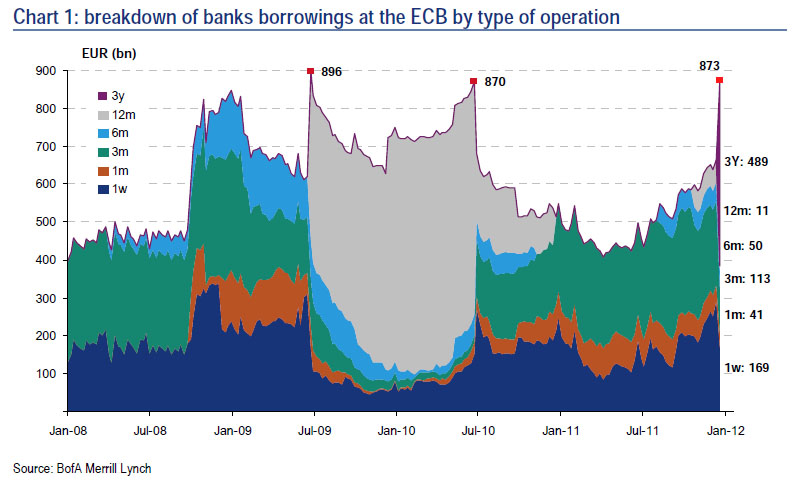 And the same chart from the perspective of Duration: whoosh. 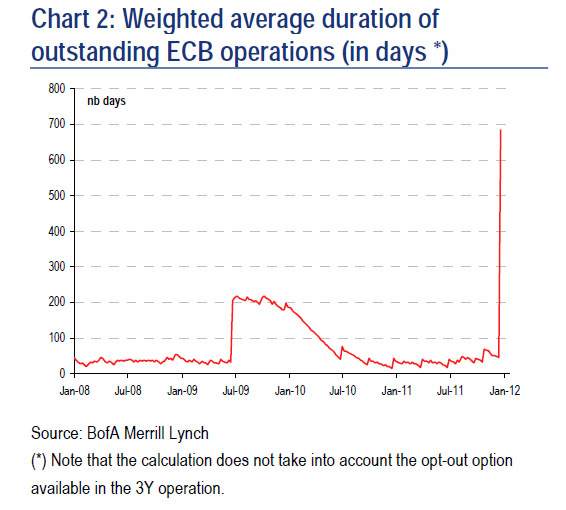 And some further thoughts from BAC:

Net of changes to other tenders, the banking system borrowed an additional €210bn from the ECB this week (see Table 1). This brings the total amount of liquidity provided to the European banking system to €873bn, still shy of the record €896bn reached in July 2009, after the ECB’s first 1y tender (Chart 1). We also note that only 523 banks used the ECB’s first 3y tender, compared to 1121 banks in 20091. As we highlighted in our preview (see here), this is overall indicative of banks’ reluctance or inability to engage in carry trades to  he same extent as 2009. At the margin this result helps explain the recent performance of front-end peripheral government bonds. However, it is by no means a panacea.

The tender results do not however change either our longer term cautious outlook on growth, or the periphery. We remain long 5y CDS protection on France, at 210bp (target 300bp, stop loss 175bp).