… and since Fukushima Japan is (politically, economically and environmentally) finished (unless somebody can turn traitors into honest people and radioactive particles into harmless substances).

– When All Else Fails, Change The Math: Japan To Fudge GDP Calculation, Will Add Up To 2% To GDP

– IMF: Japan’s Debt And Deficit ‘Are Not Sustainable’

Scouring through the news screens, we nearly fell of the proverbial chair after reading the following Bloomberg headline paraphrasing a Nikkei report: “Japan May Buy Chinese Govt Bonds, Nikkei Says….Japan is seeking to diversify forex funds and strengthen economic cooperation with China by helping make yuan more international. Japan may purchase a total of $10b worth in stages.” Naturally, there are two interpretations: the ugly one is that Japan, the 3rd largest holder of US debt after the Fed and China, is considering gradually abandoning the dollar or, as the term is better known in polite circles “diversifying.” The second one, and the far more amusing one, is that Japan will somehow bail out China by providing the much needed credit money that will translate into GDP (at a sub 100% ratio of course, because as is well known by now the world has reached the stage where one unit of debt generates less than one unit of incremental growth). The reason why this is amusing is because as the chart below shows, Japan’s debt is now a hair’s width below ¥ 1…. quadrillion. And yes, ignore the fact that the demographic squeeze in Japan is already forcing households to proceeds to monetize the largely domestically held debt. So, we wonder, where will the JGB debt curve go next in the deflationary basketcase that is Japan? As for where it has been, see below. 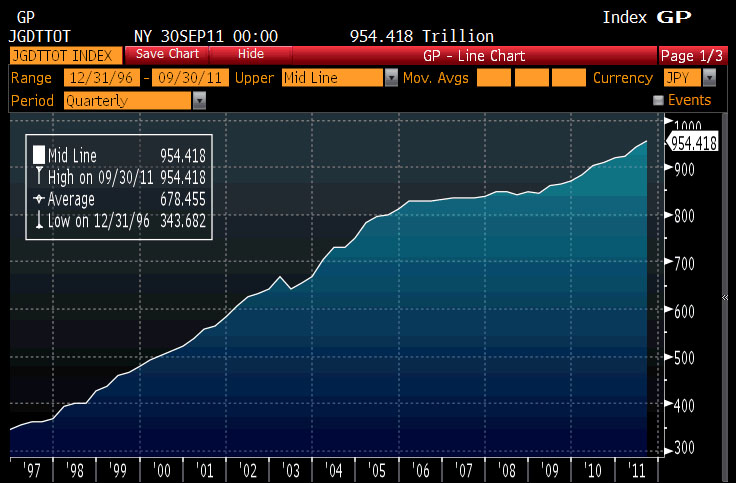 And for those wondering when Japan will officially breach one quadrillion in debt (roughly $13 trillion in USD terms) here is AFP with the low down:

Japan’s public debt is expected to swell to a record $13.5 trillion as the government finances reconstruction efforts after the March earthquake and tsunami, reports said Saturday.

Japan’s debt is already the industrialised world’s biggest at around twice its GDP, after years of pump-priming measures by governments trying in vain to arrest a long economic decline.

The public debt is expected to reach 1,024 trillion yen ($13.5 trillion) by the end of this fiscal year to March, up 99.75 trillion yen from a year earlier, the Yomiuri daily reported citing, unnamed finance ministry sources.

The national debt will inflate as Tokyo plans to issue bonds worth 11.55 trillion yen to finance the reconstruction measures in the disaster-hit northeast, the Yomiuri and NHK public broadcaster said.

The government spending for the year to March is also expected to swell to a record 106.40 trillion as the series of extra budgets will exacerbate the nation’s already tricky fiscal condition