The ‘war’ may have already begun:

– The Australian Reports: ‘All Eyes On Israel After Second Iranian Blast. CLOUDS Of Smoke Billowed Above The City Of Isfahan – Evidence That The Latest Strike Against Iran’s Alleged Nuclear Weapons Program Had Hit Its Target.’

The ‘economic war’ has started: 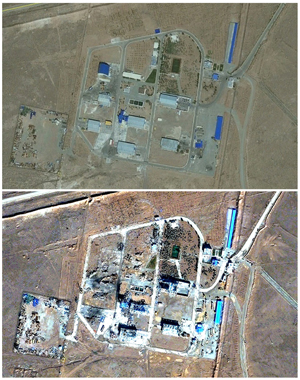 Photos of an Iranian military base near Bid Kaneh in before (top) and after (bottom) a large explosion reportedly occurred, apparent damage from which can be seen / Institute for Science and International Security

Asked whether the United States, in cooperation with Israel, was now engaged in a covert war against Iran’s nuclear program that may include the Stuxnet virus, the blowing-up of facilities and the assassination or kidnapping of scientists, one recently retired U.S. official privy to up-to-date intelligence would not deny it.

“It’s safe to say the Israelis are very active,” the official said, adding about U.S. efforts:  “Everything that [GOP presidential candidate] Mitt Romney said we should be doing–tough sanctions, covert action and pressuring the international community  — are all of the things we are actually doing.” Though the activities are classified, a senior Obama administration official also would not deny that such a program was under way. He indicated that the U.S. was not involved in every action, referring to recent alleged explosions at Isfahan and elsewhere. But, he added: “I wouldn’t assume that everything we do is coordinated.”

Iran’s Revolutionary Guards have been put on a war footing amid increasing signs that the West is taking direct action to cripple Iran’s nuclear programme.

An order from Gen Mohammed Ali Jaafari, the commander of the guards, raised the operational readiness status of the country’s forces, initiating preparations for potential external strikes and covert attacks.

The order was given in response to the mounting international pressure over Iran’s nuclear programme. Preparation for a confrontation has gathered pace following last month’s report by the International Atomic Energy Agency (IAEA) in Vienna that produced evidence that Iran was actively working to produce nuclear weapons. (Which has been proven to be based on fake intelligence. See links below. Also the Iranian ‘terror plot’ was fake.)

The Iranian leadership fears the country is being subjected to a carefully co-ordinated attack by Western intelligence and security agencies to destroy key elements of its nuclear infrastructure.

Recent explosions have added to the growing sense of paranoia within Iran, with the regime fearing it will be the target of a surprise military strike by Israel or the US.

Its ballistic missile programme suffered a major setback on Nov 12 after an explosion at the regime’s main missile testing facility at Bidganeh, about 30 miles west of Tehran.

“It looks like the 21st century form of war,” said Patrick Clawson of the Washington Institute for Near East Policy, a Washington think tank, told the Los Angeles Times. “It does appear that there is a campaign of assassinations and cyber war, as well as the semi-acknowledged campaign of sabotage.”

Ayatollah Ali Khamenei, Iran’s spiritual leader, issued a directive to the heads of all the country’s military, intelligence and security organisations to take all necessary measures to protect the regime.

Gen Jaafari responded to this directive by ordering Revolutionary Guards units to redistribute Iran’s arsenal of long-range Shahab missiles to secret sites around the country where they would be safe from enemy attack and could be used to launch retaliatory attacks.

In addition, the Iranian air force has formed a number of “rapid reaction units”, which have been carrying out extensive exercises to practice a response to an enemy air attack.

At the weekend, Iran claimed it had succeeded in shooting down an advanced American RQ-170 drone in the east of the country. If true, this would represent a major coup for the ayatollahs, as this type of drone contains sensitive stealth technology that allows it to operate for hours without being detected.

A spokesman for Nato’s International Security Assistance Force in Afghanistan would only confirm that US operators had “lost control” of a drone, without specifying the model.

Intelligence officials believe the dangerous game of cat and mouse between Iran and the West was responsible for last week’s attack on the British Embassy in Tehran. William Hague, the Foreign Secretary, closed the embassy and expelled Iranian diplomats in response.

But with Iran showing no sign of backing down over its nuclear programme, there is growing concern that Israel will launch unilateral military action.

At the weekend, Benjamin Netanyahu, Israel’s prime minister, warned that he would take “the right decision at the right moment” if Iran continued with its uranium enrichment programme.

Israel’s uncompromising approach is viewed with alarm in Washington.

Leon Panetta, the US defence secretary, has warned that a unilateral strike by Israel risked “an escalation” that could “consume the Middle East in confrontation and conflict that we would regret”.

A senior Western intelligence official said: “There is deep concern within the senior leadership of the Iranian regime that they will be the target of a surprise military strike by either Israel or the US.

“For that reason they are taking all necessary precautions to ensure they can defend themselves properly if an attack happens.”

– George Galloway: The Case Against War With Iran (Must-Listen!!!)

– The Australian Reports: ‘All Eyes On Israel After Second Iranian Blast. CLOUDS Of Smoke Billowed Above The City Of Isfahan – Evidence That The Latest Strike Against Iran’s Alleged Nuclear Weapons Program Had Hit Its Target.’

– ‘Anonymous’: A Warning About Going To War With Iran

– Iran’s Revolutionary Guards Dare Israel To Attack, Retaliation Would Send Israel To ‘The Dustbin Of History’

– Israel Seeks to Drag US Into A War With Iran – Interview With James Morris Editor Of America-Hijacked.Com

– Russian President Medvedev Urges Calm Over Iran, Warns: ‘This All Could End Up As War – A Catastrophe For The Middle East’