…what does this all mean? It means war.

And your governments prepare for that …

Unlike the broad consensus of prognosticators who feel the road for the US is a decade or more, Bass sees a three-to-five year window for a credible solution to the debt saturation or else kicking the can will cease to have any impact. The reason for the proximity is the acceleration of what happens in Europe and Japan with that respective chronology his central view – which he sees a s critical in understanding for every money manager.

In this extended interview at AmeriCatalyst, he points to the optimistic self-deception biases that leave people unable to comprehend the scenarios as they either lead to a really bad outcome or a nominally bad outcome. Using the Lehman moment as an example, Bass explains how we have been conditioned to believe there is always a backstop or savior…now those backstops at a corporate and sovereign level (central banks and the IMF for example) are being called into question in their roles (being seen for what they are – as just promises) and it is the chasm between what we want to believe and what does happen that is enormous and leaves the extreme volatility, risk-on/risk-off market the way it is.

Reiterating how critical the psychology of today’s situation, Bass goes on to debunk the optimism of globalization (at least for the Western world), destroy the myth of a 50% greek writedown solution, Japanese xenophobia and savings losses, structural versus cyclical implications for US equity deterioration, US deficits and housing‘s bottom, global debt saturation and how this tearing at the social fabric of the world will lead to – war. 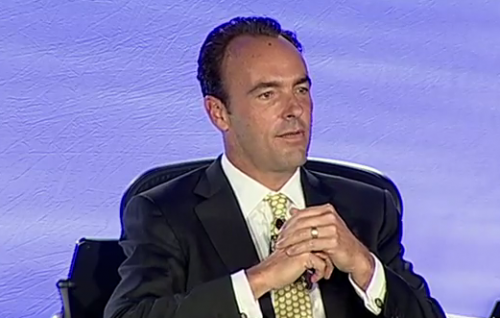 This extended interview includes some of the following views (among many others):

On the IMF and its role as global savior

He discusses in some detail Keynes and the IMF formation and the new world order he foresees as our era of the largest peacetime accumulation of global debt has no precedent (as it has historically ended in conflict or been created by conflict).

And how this debt saturation will inebitably play out:

Fundamentally, its about the social fabric of the world…what does this all mean? It means war.

And summarizing for every long-only talking head pitch-man:

This is not a cyclical rebound from a crisis we had two years and you should NOT be buying stocks because a P/E ratio is low relative to historical S&P behavior because the E is wrong. We are going to see declines and people don’t know how to position themselves for declines. We are at peak earnings now! Earnings only look good because if you take all the bad assets and put them on the public balance sheet.

We need to delever globally. We haven’t delevered. Just now we are seeing marginal delevering in Europe and all hell is breaking loose. An summing up:

Consensus is US low/slow GDP growth – no recession, US better than Europe, Europe mild recession, muddle through, go all in to Emerging markets as that’s where the convexity is.

The consensus is never going to be right.