Anyone care to join “Fukushima 50”? It’s not too late. They need fresh workers in the “new normal” at the plant where 10 sieverts/hour radiation is considered no big deal. (TEPCO says it doesn’t matter because no work is planned in the area of 10-plus sieverts/hr radiation.) 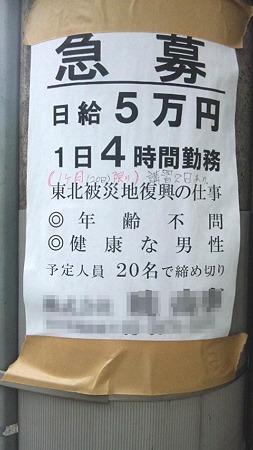 Someone in Japan (t2aki) posted the photo of an ad on a utility pole, which reads:

Work to assist recovery in the disaster affected area in Tohoku