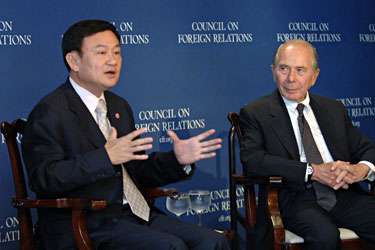 With mere pittances on record paid to these organizations for their global campaign on Thaksin’s behalf, and now with his party back in power, it will be time to pay the real fee for doing business with the global elite. Expect sweeping “economic liberalizations” while NGOs move in to build up an even more invasive network within Thailand.

It should also be noted that even now, Thaksin’s “red shirt” movement and the US-funded NGOs that support it are not only mobilized on Thaksin’s behalf, but to illustrate how US-funded “civil society” actually serves the global-elites’ interests above and beyond their own regional stooges, they have been mobilized to bolster support for other regional stooges including Ibrahim Anwar of Malaysia who is planning a massive rally in the nation’s capital on July 9th, 2011. Indeed, Thailand’s NED-funded Prachatai covered the Thai NED-funded People’s Empowerment Foundation, who were rallying on behalf of Malaysia’s NED/NDI/Open Society-funded Bersih movement at the Malaysian Embassy in Bangkok.

It is unclear what will transpire in Thailand next. Allowing Thaksin’s proxy party to come back to power, but the party itself with an overtly tenuous 38% mandate, may allow nationalist elements to slowly undermine and dismantle the party once and for all. Thaksin Shinawatra himself claims he will remain in exile, as his return would undoubtedly fill the streets with protests and mobilize the military once again to oust him. For years PTP has claimed to have the majority of Thailand’s population behind them. After elections, while they won by a slim majority, the fact that only 38% of voting Thais actually chose them exposes how tenuous their support really is. With this knowledge in hand, whether done by the government or grassroots Thais, a campaign to educate, inform, and get this 38% self-sufficient politically and economically has a real chance of completely undermining the globalists’ neo-liberal incursion into Thailand.

It will not be easy to educate this 38% however, especially regarding their patron Thaksin and his true, foreign-serving agenda. This is because while imposter academics like Dr. Andrew Walker of Australia’s National University throw up unrelated correlations between a growing number of Internet connections in Thailand and PTP’s rising popularity, reality suggests that the 38% that supports an overt treasonous criminal in direct contradiction to the rule-of-law, did so because of a lack of information, not access to it.

By not contesting Thakin’s party’s return to power, and instead “lying low,” Thailand’s establishment has put off what was admittedly going to be another round of street level bloodshed. Had protests started because of a perceived “stolen election” the level of violence, and the rhetorical justification to completely eviscerate Thailand’s nationalist establishment may have been achievable, just as it was in Egypt and Tunisia where globalist-hits have already taken place. Even if the Thai government was able to put down such unrest, as seen in Syria and Libya, heavily armed militants and now overt foreign support have created the beginnings of armed insurrections that have hobbled their countries politically and economically. The prospect of street protests would have also raised the specter of similar “copy-cat” protests in neighboring Malaysia and Myanmar, where globalist-stooges Aung San Suu Kyi and Ibrahim Anwar are planning similar campaigns to conveniently coincide with the predicted unrest in Thailand. This would have translated into regional instability.

Depending on how long Thailand’s establishment draws out their campaign to undermine Thaksin’s proxy party, and how overt they are about it, Thailand’s decision to accept the election’s outcome, albeit one that is sure to frustrate the other 62% that did not vote for Thaksin, may just balk entirely a coordinated attempt at destabilizing Asia. This is news that will make those in Beijing quite happy, and as the International Criminal Court suffers a debilitating rejection by the entire continent of Africa and Western-backed oppositions struggle indefinitely in both Libya and Syria, the globalists’ inability to stoke an Asian political conflagration may signal the final cracks in their last ditch effort to contain Beijing and Moscow in their bid to consolidate their unipolar global “international order.”

So while it may seem like a crushing defeat, it is still too early to tell. Whether Thaksin’s sister can consolidate once again her brother’s autocratic grip on power, annihilate his enemies, and allow him to return to power and pay back the likes of James Baker, Edelman, Robert Amsterdam, and Robert Blackwill their full “fees” or not will mark the progress of the globalists in their attempt to reestablish control of Southeast Asia and subsequently contain China. For now, the window of opportunity seems open for both sides, while time seems to be on the side of those favoring a multipolar world order.

Tony Cartalucci’s articles have appeared on many alternative media websites, including his own at
Land Destroyer Report.