– A Senior Banker Was Just Gunned Down In Puerto Rico In A Suspected Professional Hit Job (Business Insider, Jun. 17, 2011):

A banker was gunned down in Puerto Rico on Wednesday and at least one Puetro Rican news agency suspects that it might have had something to do with an audit he had recently launched.

The banker, 56-year old Maurice J. Spagnoletti, was Doral Financial corporation’s executive vice president of Mortgage and Banking Operations. He had only been working at Doral for 6 moths when he was killed.

What happened is scary. Caribbean Business News says that he was driving a Lexus near the intersection of Muñoz Rivera Avenue and the Minillas Tunnel on the major highway in the capital of San Juan when gunmen, who had been trailing him, shot him three times.

So well placed that now detectives are investigating the crime. One angle is that the killing might have had something to do with recent layoffs. According to CBNews:

Investigators have asked Doral Bank security for a list of employees who were laid off under a restructuring effort spearheaded by Spagnoletti.

Another angle is that it might have had something to do with an audit of Doral that he had recently launched. According to the Latin American Herald Tribune:

[The police chief] insisted that the audit, which according to the San Juan press uncovered irregularities, cannot be pointed to as the factor that led to the death of Spagnoletti, whose killing appeared to be a professional hit.

The police commander said that the victim was shot three times in the head as he was attempting to flee in his vehicle from pursuers on the De Diego Expressway in downtown San Juan.

Spagnoletti had an impressive career in banking. A snapshot of his working life from LinkedIn says: 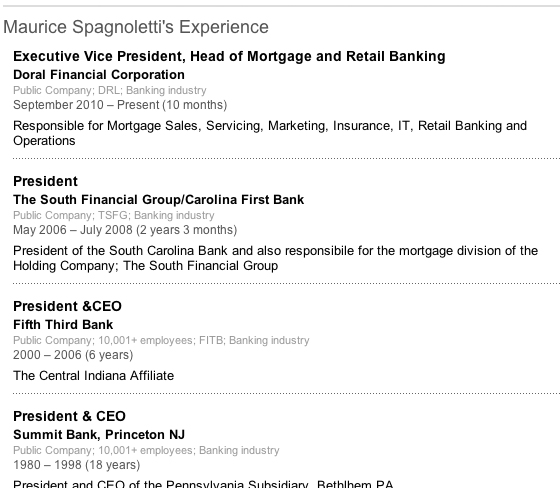