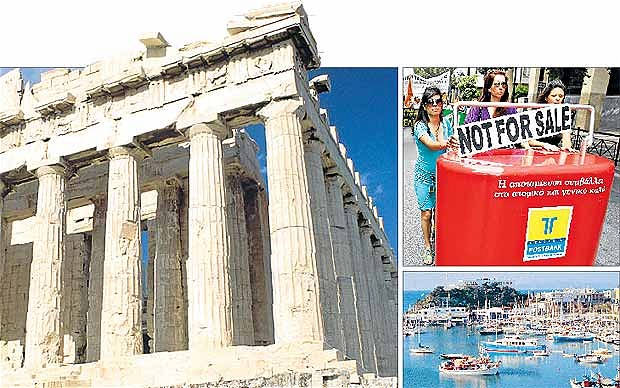 Roll up, roll up, roll up. Elgin Marbles, Acropolis, Mykonos. Anyone? You don’t have to be an ancient Greek historian to understand the significance of it. But maybe it helps. For Thucydides, born back in 460 BC, the Port of Piraeus was the commercial heart of the Athenian democracy. “From all the lands, everything enters,” wrote the author of the History of the Peloponnesian War.

But now the port is up for sale – alongside the sort of assets even Thucydides would never have envisaged – in the biggest and most controversial privatisation Greece has ever seen.

Under pressure to raise €50bn as the quid pro quo for its massive €110bn (£98bn) bail-out, Greece is being forced to hawk its industrial and commercial backbone to the highest bidder.

On the block, alongside the Government’s 74pc stake in Piraeus, is a similar-sized holding in the country’s other main gateway port – Thessaloniki. Then there are the government’s stakes in a host of public and private companies – as well as tracts of land. Corporate assets include OTE, the largest telecommunications company in the Balkans; PPC, the country’s biggest electricity producer; horse-racing organisation ODIE; the state’s 34pc stake in Europe’s biggest betting company OPAP; another 34pc stake in Hellenic Postbank and train operator TrainOSE.

It is a gut-wrenching moment for a nation, whose heavily unionised workers are unlikely to be forced into accepting such privatisations without a fight.

Kevin Featherstone, professor of contemporary Greek at the LSE, says the sell-offs push Greece’s capabilities to the limits. “It is very controversial. It is testing the limits of what government should be doing,” he says. “It is a challenging thought that foreigners have come to sell the family silver.

“But the Greek government has realised the depth of the crisis. And so have the people of Greece. If the choice is between further tax rises or more job losses then people are OK with OPAP being sold.”

That it has come to this goes right to the heart of the eurozone bail-out programme, highlighting the political tensions between the main provider of funds – Germany – and the weaker southern nations taking the money. That German companies are likely to wind up as the owners of many of the assets only adds to the controversy.

In addition to the €110bn of rescue aid already promised in last year’s bail-out orchestrated by the International Monetary Fund, European Union officials reckon Greece will need around €30bn more in each of 2012 and 2013.

Privately angry that Greece has so far done too little after last year’s bail-out to put its own debt-bloated house in order, officials from Germany’s finance ministry last week pressed for the holders of Greek bonds to share some of the pain. They suggested the bondholders should accept late repayment of their investments – a rescheduling of debts that has so far been resisted by the European Central Bank.

Whatever, something has to give – because the clock is ticking. Greek bond spreads have rocketed far higher than last year. And economists now forecast that between 2009 and the end of this year, Greece will have added €50bn in debt. Moody’s has just downgraded Greece even further into junk bond territory to CAA1 – a rating that implies a 50pc chance of default over the next five years.

Greece needs to show the markets something. Which is why prime minister George Papandreou has pledged to accelerate the privatisation programme. His promise has been met with dissension from his political opponents at home and calls from EU diplomats abroad to appoint an independent body to monitor and, if necessary, force the asset sales, whether Greece likes it or not.

The Greek government is now looking at bringing in an expert from overseas with business experience rather that a European technocrat to oversee a special vehicle fund that will house all the privatisation assets. This, it hopes will ease concerns that the process will crumble.

Already advisers have been appointed to around 15 privatisation programmes, with the OTE telecoms stake earmarked as first to be sold.

The advisers and sell-offs being set up include:

• Deutsche Bank and National Bank of Greece on the sale of OPAP, the state gambling monopoly

• France’s BNP Paribas and Greece’s National Bank on the extension of an operating lease on Athens International Airport.

• Lazard on exploiting the commercial activities of the Greek trusts and loans funds.

Harris Ikonomopoulos, president of the British Hellenic Chamber of Commerce – which is holding a conference in London for would-be buyers of Greek assets at Claridges later this month – says: “These are long stagnating assets – and it is a good thing that the sales process is being expedited to fill up the coffers and jump-start the economy. More than that, competition will create growth. New investment in Greece is essential because it will produce new taxpayers and new tax income.”

Simply listing assets for sale is only half the problem, however.

There is also a more widespread obstacle to the privatisation programme. Greece is still in recession, with Deutsche Bank forecasting a 2.9pc contraction this year. Staff in state-controlled industries are naturally jumpy about job security.

Already the unions, supported by most of the opposition parties, are preparing for a battle. Thousands of Greeks have taken to the streets in Athens and Thessaloniki to protest against the sales. Staff at Postbank blocked the entrance to the retail bank’s headquarters in Athens. The country’s public sector umbrella union, ADEDY, is planning a 24-hour strike next month to protest against the privatisations.

Says the LSE’s Featherstone: “The problem is that Greece has a history of partial privatisation. This means that even when government has had a minority stake, the culture and the management are still overwhelmed by government.

“It is because management of businesses is so dependent on political influence that unions have so much power. What Greece needs is a huge cultural change from an environment where business is too close to politics. But to jump to an open and competitive market is a deep root-and-branch shift. The hope is that this crisis is actually going to be able to trigger this fundamental shift. But attitudes are deeply embedded.”

You have been warned!!!

PT: Is the International Monetary Fund Greece’s only solution, or are there other alternatives?

MK: The only solution for Greece is to arrest the Goldman Sachs bankers immediately and all those involved in the fabrication of Greek economic data in 2000, when you became a member of the eurozone. The next step is to nationalize all banks like Sweden did in 1993. The International Monetary Fund is that last thing you need. You will lose your sovereignty. It exercises terrorism. You will be raped in such a way, that it will be the worst pain you have ever felt.

PT: There are those who believe that the IMF is not the “bad wolf” but the only solution for Greece

MK: If someone burns down your house in order to sell you charcoal, would you consider this logical? That is exactly what Goldman Sachs did to the Greek economy. They burned you down like arsonists and then they tell you not to worry they’ll give you charcoal. It’s outrageous. The IMF has said that it can provide Greece with help. The Wall Street investment hedge funds are attacking Greece’s bond market so that the Greek economy collapses. And they’re doing this for a simple reason; to force the Greek people to ask for help from the IMF. The IMF will say, we came because you asked for our help. Wall Street bankers work very closely with the IMF. It’s a financial mafia and the hedge funds are the assassins. Research conducted on Goldman Sachs in the USA and in Europe show how big a mafia it is. They are involved in illegal activity throughout the world.

3 thoughts on “The Big Fat Greek Sell-Off: Foreigners (Like Rothschild) Have Come To Sell The Family Silver”