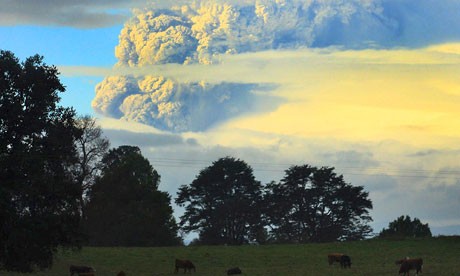 Thousands of people have been evacuated from their homes after a volcano which has been dormant for decades started erupting in southern Chile.

Large columns of smoke reached more than six miles from the crater of the Puyehue volcano, which lies about 500 miles south of the capital, Santiago.

Winds fanned the ash towards neighbouring Argentina over the skies in the ski resort city of San Carlos de Bariloche, which caused the local airport to close.

The governor of Chile’s Los Rios region said fire could be seen in the volcano’s crater and smoke was billowing into the sky.

The eruption prompted authorities to shut a heavily travelled border crossing with Argentina, but there have been no reports of injuries.

The Chilean government said it was evacuating 3,500 people from the surrounding area as a precaution.

Authorities put the area around the volcano on alert after a flurry of earthquakes. The National Emergency Office says it has recorded an average of 230 tremors an hour.

The chain of Puyehue-Cordon Caulle volcanos – of which there are four – last saw a major eruption in 1960.