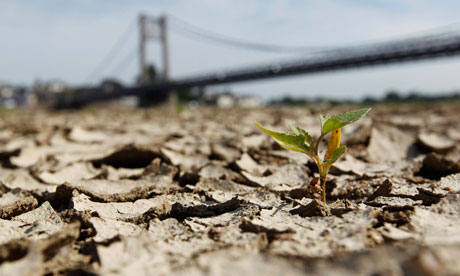 The dry riverbed of the Loire near the Anjou-Bretagne bridge in Ancenis, western France. Photograph: Stephane Mahe/REUTERS

Food prices are expected to hit new highs in the coming weeks, tightening the squeeze on UK households and potentially triggering further unrest in developing countries unless there is heavy rainfall across drought-affected Europe, the United Nations has warned.

The average global price of cereals jumped by 71% to a new record in the year to April, more than three times higher than a decade ago, according to latest UN figures, prompting its Food and Agriculture Organisation to warn that Europe faces a pivotal few weeks.

With the dry spell forecast to continue for several weeks across Europe, Abdolreza Abbassian, senior grains economist at the FAO, said: “Europe is entering a very critical month. We can’t do without rain any more. If the current situation continues prices will respond very aggressively.”

“Our fear is that we still haven’t seen the worst of food inflation in vulnerable countries and that could be coming. One way or another, rising food prices bring hardship on their people and you can’t rule out the possibility of further food riots. A lot depends on the next few weeks and it’s impossible to predict how Mother Nature will behave,” Abbassian added.

The UN warning came after the release of data showing that the amount of speculative money that has been pouring into basic foodstuffs – and other commodities – also hit a new record in April, putting additional upward pressure on prices that are already being forced higher by the prospect of further crop failures.

The amount invested in commodities through exchange-traded funds (ETPs), jumped to $451bn (£273bn) in April – more than 40 times higher than a decade ago – according to new figures from Barclays Capital. It said investors were attracted by what they believed would be higher returns from raw materials on the back of growing demand from emerging markets such as China and India.

However, while the huge influx of speculative money has increased the cost and price volatility of wheat and other commodities, the more immediate problem is the drought in Europe and the impact of recent floods in the US. Two months of very little rainfall in Europe and the ongoing export ban in Russia have helped push Standard & Poor’s GSCI agriculture index of six key food commodities, such as wheat, corn and soybeans, up 7.1% in the past fortnight alone.

Duncan Green, Oxfam’s head of research, said while rising cereal prices would make life much harder for many people in Europe, the impact in the developing world would be devastating. He pointed out it was not uncommon for people in the developing world to spend more than half their money on staple items. As a proportion of salary, the average Indian paid the equivalent of £10 for a litre of milk and £6 for a kilo of rice, he added.

“We are very worried about high prices,” Green said. “Food riots are definitely a possibility. If you’re struggling to feed your kids and the price of bread suddenly doubles, it could prove the tinder that sparks the whole thing off.”

The fate of wheat prices could largely depend on Russia, Abbassian said. Last year, Russia banned wheat exports after a disastrous crop and analysts said the ban could well remain in place until September and possibly some time beyond.

Although Russia’s wheat crops have recovered quite well this year, a lifting of the export ban would be likely to increase the domestic price, a development politicians might wish to avoid in the run-up to the parliamentary election later this year and the presidential one next spring.