If you haven’t been paying attention, Goldman Sachs shares have been in freefall.

They lost over 3% Friday amid a slew of headlines about imminent subpoenas related to Blankfein, the firm’s activities during the crisis, and just generally for being the much-reviled Goldman Sachs.

The stock has lost over 10% in just the last week since Matt Taibbi wrote his latest takedown, costing the firm over $8 billion in market cap.

At $134, it’s only barely above its $129 book value, meaning that either A) people don’t believe that the company’s book value is real, or b) the value of the Goldman Sachs franchise has been reduced to $5/share, or just over $2.5 billion, based on 517 million shares outstanding.

The stock is only barely above where it was at its depths last summer, before it settled civil fraud charges from the SEC.

Panic time, and of course, another sign of the rapture. 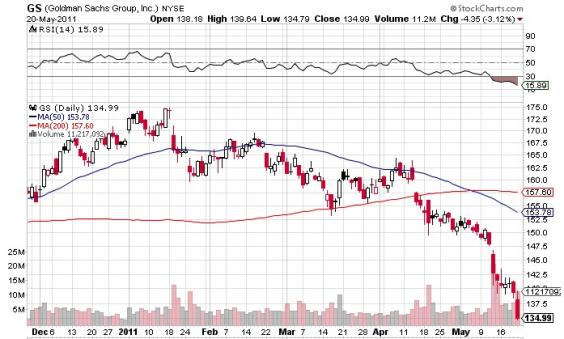