– Guest Post: The Other Disaster That Is On-Going, Unabated (by Tokyo Brown Tabby):

And that is the aftermath of the March 11 earthquake and tsunami that hit Japan’s Tohoku region very hard. As of May 13, more than 15,000 people have been killed, 9,506 are still missing, and about 115,500 are still living in 2,425 evacuation shelters, according to the National Police Agency.

After more than 2 months since the quake and tsunami, the disaster-hit areas look almost the same as on March 11 after the tsunami. There are many areas still without power and water, and at some shelters the lack of food and water is chronic. At a shelter in Minami Soma City (large part of the city is now designated as “planned evacuation zone”), a meal used to consist of one riceball, banana and milk until very recently.

PM Kan and his administration can plan all they want for their grand vision for Tohoku (those “eco-towns” made by shaving off the mountains, for example), but the reality on the ground is that no one in power is paying much actual attention.

Here’s a ground-level report by one volunteer who went to Tohoku to help people get on their feet. The original is in Japanese, edited and translated by Tokyo Brown Tabby who is a friend of this volunteer. (I edited the English for length and style.)

My 5 days as a volunteer in Tohoku

I joined “The 7th Tokyo Volunteer Work Tour” and arrived in Ichinoseki in Iwate Prefecture on May 11 with 79 others to help residents in various cities and towns in Tohoku. We went in as a team of 5.

Our task was to pick up wooden debris out of the already-sorted-out rubble and to put them on the back of the truck. Wooden debris all came from somebody’s houses.

Fishing port was quiet. Bush warblers were singing. Cherry blossoms were still blooming. So calm and peaceful in the middle of devastation and desolation.

Our task was to remove the sludge from under the floors of the kitchen, hallways, and bathroom. We put on the headlights to work. The husband and wife were very kind to us.

We went to the Island on a ferryboat. I had seen tons of rubble for the past 2 days, but the sight of the port seen from the boat was simply shocking. The same was true of what I saw after I arrived on Oshima Island. Piles of rubble and stacked-up cars. “When will this end?” I wondered.

We joined other volunteers and 20 of us sorted out the rubble of a completely destroyed home of a fisherman. Fishing nets, net cords, wooden debris, clothes, plastics, pieces of glasses, metals, and so on. When the work was done and the fisherman’s wife thanked us, I couldn’t help crying.

What did these people do to deserve this? Their school-age daughter was smiling and waving at us as we departed in a car back to the ferry.

Rikuzen-Takata City was in a total ruin. Nothing but rubble, as far as I could see, 360 degrees. I could almost see the horizon. I was dumbstruck. There was a group of about 100 people in an strange uniform of navy blue and orange. It said “Keishi-cho [Metropolitan Police Department]” on the back. Actually witnessing a search party in action was a different kind of shock to me.

Today’s work was to sort out the rubble. Whenever we found letters, photographs, and records among the rubble, we asked the husband what to do with them. It was a hot day. We were treated by the family to slices of watermelon. It was delicious.

Today’s task was to pitch tents. We started out by cutting grass, digging soil and leveling the ground. We spent the whole day pitching two big tents. It was almost frustrating what little we could do every day. Still, the the family would be using these tents, and that made me happy.

On the last day, all 80 members got together to have a meeting. Each team had been sent to different places, met different people, done different tasks. At the meeting, we shared our stories with each other. Below are some of the stories I heard from other teams:

One team was sorting out rubble at a private home and found a torn amulet of Amaterasu-Omikami, the Goddess of the Sun [one of the figures in ancient Japanese mythology worshipped in Shinto] . They asked the husband what to do with it. He said, “Throw it away, now that I know there is no god.” My heart sank, hearing that.

Another team did the task of neatly folding the clothes donated by people from all over the country, inside a shelter (a large gym in Kesennuma). They did not make eye contact with the evacuees, and they were not to be seen by the evacuees. I was told that was an unspoken rule. The reason for neatly folding clothes is to make them look as nice as possible so as to make people feel like wearing them. If people saw used clothes piled in a mess, they might feel insulted. A little consideration would make a big difference.

I heard a story of a small group of local people having escaped tsunami by going to a shelter on a high ground. But there they became isolated. Night was cold. Frostbite and hunger came. They feared what would become of them. Then somehow, news arrived that in other places there were people alive and well. The isolated people were so happy to hear that, and said, “Let’s not worry, the world has survived.”

The girl who told me the story said that important thing was not just doing the work but telling people around us about the reality of Tohoku. We saw it, heard it, firsthand. “Now it’s time for us to go back to Tokyo and share it with others,” she said.

I couldn’t agree with her more.

While I was up there I met volunteers from all over the country and from foreign countries, too. Everywhere we went, local people on the street kept telling us “Thank you for your help.” One old woman I met at a hot spring said to me, “I may not see you again, but I wish you good health.”

I will definitely go back, next time even by myself. Work is endless, the situation is truly awful. Volunteer workforce is far from sufficient. More needed, and longer.

People of Tohoku were smiling and very strong. The sky was blue and the clouds were as vigorous as in summer.

I have left my heart there. I will continue to get involved for as long as I can.

This girl apparently had never seen Tohoku before the tsunami, and didn’t know some of the beaches in the region used to look like this photo. All she saw was debris and rubble. It’s sad, and is sadder that 2 months after the quake hardly anything seems to have “recovered” in Tohoku.

The Fukushima I Nuclear Power Plant disaster casts a pall over the entire Japan, particularly over Tohoku, hindering recovery. 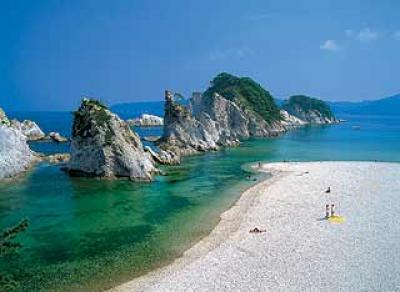