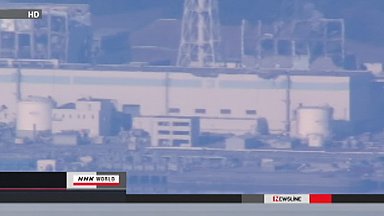 The operator of the damaged nuclear power plant in Fukushima has reported a sharp rise in the concentration of a radioactive material in samples of seawater near the Number 3 reactor.

The level is 1,800 times the national legal limit, compared to 550 times, which was reported the previous day.

Last Wednesday at the same location near the water intake of the Number 3 reactor, water contaminated with highly radioactive substances was found flowing into the sea from a pit. TEPCO says it detected cesium-134 at 32,000 times the legal limit.

In its latest announcement, TEPCO said the concentration of radioactive iodine in seawater samples from the same location fell from 1,900 times the limit on Monday to 630 times on Tuesday.

The utility also said it detected radioactive materials at levels higher than the national limit at 2 of the 4 survey points along the shoreline near the plant.

It says cesium-134 with a concentration level 1.8 times the limit was found at a point 330 meters south of the water drainage gates of the Number 1 to 4 reactors.