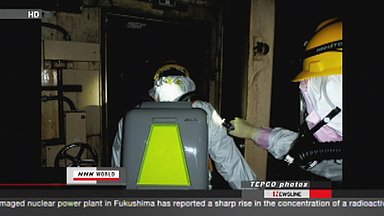 Workers have entered the Number 3 reactor building at the Fukushima Daiichi nuclear plant for the first time since a hydrogen explosion 3 days after the March 11th quake and tsunami.

TEPCO says the workers measured radiation of 160 to 170 millisieverts per hour around the door of the containment vessel.

The utility says it would be difficult to start work on injecting nitrogen gas needed to prevent a hydrogen blast into the containment vessel under such high radiation levels.

The utility said the 2 workers were exposed to radiation of 2 to 3 millisieverts.

TEPCO has now been able to send workers into all 3 reactors that were operating at the time of the quake and tsunami. Workers entered the Number 1 reactor building on May 5th and the Number 2 reactor on Wednesday morning.

TEPCO is rushing to make the reactor buildings safe enough for workers to go inside and proceed with the plans outlined in its roadmap to stabilize the reactors.

This includes installing new cooling systems to circulate water leaked from containment vessels back into the reactors and the nitrogen injections.