By sealing up cells full of contaminated pollen, bees appear to be attempting to protect the rest of the hive 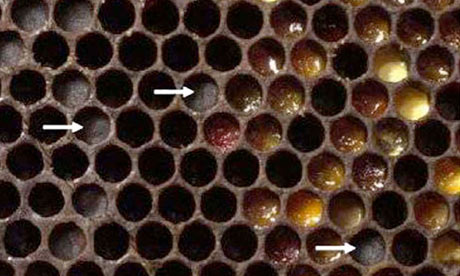 Honeybees are taking emergency measures to protect their hives from pesticides, in an extraordinary example of the natural world adapting swiftly to our depredations, according to a prominent bee expert.

Scientists have found numerous examples of a new phenomenon – bees “entombing” or sealing up hive cells full of pollen to put them out of use, and protect the rest of the hive from their contents. The pollen stored in the sealed-up cells has been found to contain dramatically higher levels of pesticides and other potentially harmful chemicals than the pollen stored in neighbouring cells, which is used to feed growing young bees.

“This is a novel finding, and very striking. The implication is that the bees are sensing [pesticides] and actually sealing it off. They are recognising that something is wrong with the pollen and encapsulating it,” said Jeff Pettis, an entomologist with the US Department of Agriculture. “Bees would not normally seal off pollen.”

But the bees’ last-ditch efforts to save themselves appear to be unsuccessful – the entombing behaviour is found in many hives that subsequently die off, according to Pettis. “The presence of entombing is the biggest single predictor of colony loss. It’s a defence mechanism that has failed.” These colonies were likely to already be in trouble, and their death could be attributed to a mix of factors in addition to pesticides, he added.

Bees are also sealing off pollen that contains substances used by beekeepers to control pests such as the varroa mite, another factor in the widespread decline of bee populations. These substances may also be harmful to bees, Pettis said. “Beekeepers – and I am one – need to look at ourselves in the mirror and ask what we are doing,” he said. “Certainly [the products] have effects on bees. It’s a balancing act – if you do not control the parasite, bees die. If you control the parasite, bees will live but there are side-effects. This has to be managed.”

The decline of bee populations has become an increasing concern in recent years. “Colony collapse disorder”, the name given to the unexplained death of bee colonies, is affecting hives around the world. Scientists say there are likely to be numerous reasons for the die-off, ranging from agricultural pesticides to bee pests and diseases, pollution, and intensive farming, which reduces bee habitat and replaces multiple food sources with single, less nutritious, sources. Globalisation may also be a factor, as it spreads bee diseases around the world, and some measures taken to halt the deaths – such as massing bees in huge super-hives – can actually contribute to the problem, according to a recent study by the United Nations.

The loss of pollinators could have severe effects on agriculture, scientists have warned.

Pesticides were not likely to be the biggest single cause of bee deaths, Pettis said: “Pesticide is an issue but it is not the driving issue.” Some pesticides could be improving life for bees, he noted: for many years, bees were not to be found near cotton plantations because of the many chemicals used, but in the past five years bees have begun to return because the multiple pesticides of old have been replaced with newer so-called systemic pesticides.

Studies he conducted found that bees in areas of intensive agriculture were suffering from poor nutrition compared with bees with a diverse diet, and this then compounded other problems, such as infection with the gut parasite nosema. “It is about the interaction of different factors, and we need to study these interactions more closely,” he said.

The entombing phenomenon was first noted in an obscure scientific paper from 2009, but since then scientists have been finding the behaviour more frequently, with the same results.

Bees naturally collect from plants a substance known as propolis, a sort of sticky resin with natural anti-bacterial and anti-fungal qualities. It is used by bees to line the walls of their hives, and to seal off unwanted or dangerous substances – for instance, mice that find their way into hives and die are often found covered in propolis. This is the substance bees are using to entomb the cells.

The bees that entomb cells of pollen are the hives’ housekeepers, different from the bees that go out to collect pollen from plants. Pettis said that it seemed pollen-collecting bees could not detect high levels of pesticides, but that the pollen underwent subtle changes when stored. These changes – a lack of microbial activity compared with pollen that has fewer pesticide residues – seemed to be involved in triggering the entombing effect, he explained.

Pettis was speaking in London, where he was visiting British MPs to talk about the decline of bee populations, and meeting European bee scientists.

1 thought on “Scientists: Honeybees ‘Entomb’ Hives To Protect Themselves Against Pesticides”