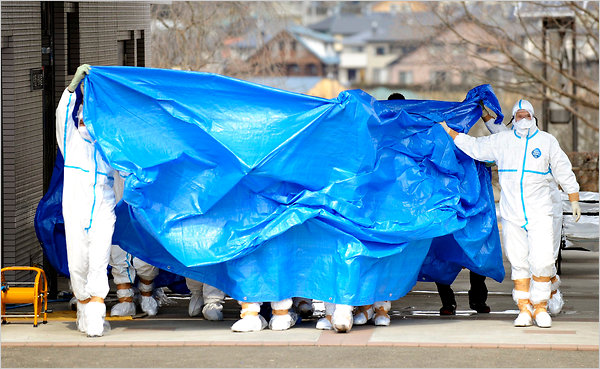 (Japan Times) — Radiology experts from Greenpeace urged the government Wednesday to expand the evacuation zone around the Fukushima No. 1 nuclear plant after they found high levels of radiation outside the 20-km mandatory no-go zone.

Jan van de Putte, the radioactivity safety adviser of the NGO, said the survey, taken on a road between the villages of Iitate and Tsushima in Fukushima Prefecture, saw a radiation level of 100 microsieverts per hour, despite being outside of the evacuation area.

One would reach the annual legal limit of 1,000 microsieverts — or 1 millisievert — of radiation in about 10 hours in such an environment, van de Putte said, adding that it is likely the people living in Iitate, about 9 km outside the no-go zone, “have surpassed that level” of exposure already.

The team of experts at Greenpeace said they conducted their monitoring Saturday and Sunday, and found proof radioactivity hasn’t spread evenly from the reactors.

Some locations farther away from the damaged nuclear plant showed higher levels of radiation than closer areas “due to geographical characteristics,” van de Putte said.

“There was still a lot of activity in Iitate” when they visited the area, he recalled. The current evacuation zone “does not match the reality of the risk” and the ways it has spread, he added.

An official of the Nuclear and Industrial Safety Agency said high radioactivity levels detected by the NGO around the town of Iitate “could not be considered reliable,” adding that most people have already voluntarily left the town.

Van de Putte, who took part in surveying other nuclear disasters, including Chernobyl, recommended the current evacuation zone be expanded to at least a 30 km radius, while children and pregnant women beyond that zone should also consider moving farther away.

From a personal perspective, areas that could surpass 1 millisievert should be considered risky, he said, adding, “the main concern (in such areas) is increased risk of cancer.”

Although some within the government have called Greenpeace’s surveys erroneous, the group stressed that its numbers in other areas of the prefecture matched those released by the government.

Greenpeace said efforts to gather radioactivity readings is also an act of support for those who in the future may seek to sue Tepco for damages.