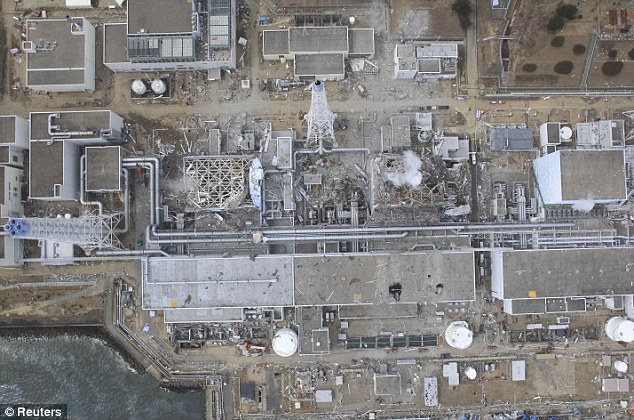 March 31 (Bloomberg) — Japan’s damaged nuclear plant may be in danger of emitting sudden bursts of heat and radiation, undermining efforts to cool the reactors and contain fallout.

The potential for limited, uncontrolled chain reactions, voiced yesterday by the International Atomic Energy Agency, is among the phenomena that might occur, Chief Cabinet Secretary Yukio Edano told reporters in Tokyo today. The IAEA “emphasized that the nuclear reactors won’t explode,” he said.

Three workers at a separate Japanese plant received high doses of radiation in 1999 from a similar nuclear reaction, known as ‘criticality.’ Two of them died within seven months.

Tokyo Electric Power Co., the Fukushima Dai-Ichi plant’s operator, and Japan’s nuclear watchdog, dismissed the threat of renewed nuclear reactions, three weeks after an earthquake and tsunami triggered an automatic shutdown. Tokyo Electric has been spraying water on the reactors since the March 11 disaster in an effort to cool nuclear fuel rods.

“The reactors are stopped, so it’s hard to imagine re- criticality,” occurring, Tsuyoshi Makigami, a spokesman for the utility, told a news conference today.

A partial meltdown of fuel in the No. 1 reactor building may be causing isolated reactions, Denis Flory, nuclear safety director for the IAEA, said at a press conference in Vienna. This might increase the danger to workers at the site.

Nuclear experts call such reactions “localized criticality.” They consist of a burst of heat, radiation and sometimes an “ethereal blue flash,” according to the U.S. Energy Department’s Los Alamos National Laboratory website. Twenty-one workers worldwide have been killed by criticality accidents since 1945, the site said.

The IAEA acknowledged “they don’t have clear signs that show such a phenomenon is happening,” Edano said.

Radioactive chlorine found March 25 in the No. 1 turbine building suggests chain reactions continued after the reactor shut down, physicist Ferenc Dalnoki-Veress of the James Martin Center for Nonproliferation Studies in Monterey, California, wrote in a March 28 paper. Radioactive chlorine has a half-life of 37 minutes, according to the report.

Japan’s Nuclear and Industrial Safety Agency said there’s no possibility of uncontrolled chain reactions. Boron, an element that absorbs neutrons and hinders nuclear fission, has been mixed with cooling water to prevent this, Hidehiko Nishiyama, a spokesman for the agency, told reporters today.

Contamination of seawater found near the 40-year-old plant has increased. Radioactive iodine rose to 4,385 times the regulated safety limit yesterday from 2,572 times on Tuesday, Nishiyama said. No fishing is occurring nearby and the sea is dispersing the iodine so there is no health threat, he said.

There was 180 becquerel per cubic centimeter of radioactive iodine-131 found in the ocean 330 meters (1,082 feet) south of the plant. Drinking one liter of fresh water with that level would be equivalent to getting double the annual dose of radiation a person typically receives.

Workers have averted the threat of a total meltdown by injecting water into the damaged reactors. The complex’s six units have been reconnected with the power grid and two are using temporary motor-driven pumps. Work to repair the plant’s monitoring and cooling systems has been hampered by discoveries of hazardous radioactive water.

Dismantling the plant and decontaminating the site may take 30 years and cost Tokyo Electric more than 1 trillion yen ($12 billion), engineers and analysts said. The government hasn’t ruled out pouring concrete over the whole facility as one way to shut it down, Edano said. Tokyo is 135 miles (220 kilometers) south of the Dai-Ichi power plant.

Dumping concrete on the plant would serve a second purpose: it would trap contaminated water, said Tony Roulstone, an atomic engineer who directs the University of Cambridge’s masters program in nuclear energy.

“They need to immobilize this water and they need something to soak it up,” he said. “You don’t want to create another hazard, but you need to get it away from the reactors.”

The process will take longer than the 12 years needed to decommission the Three Mile Island reactor in Pennsylvania following a partial meltdown in 1979, said Hironobu Unesaki, a nuclear engineering professor at Kyoto University.

Moody’s Japan K.K. cut its rating on Tokyo Electric and warned it may reduce it further, saying the problems at Fukushima “appear far from being resolved” and the company is likely to remain unprofitable for a long time. Senior secured and long-term issuer ratings were downgraded to Baa1 from A1, Moody’s said in a statement.

Tokyo Electric’s shareholders may be wiped out by clean-up costs and liabilities stemming from the nuclear accident, the worst since Chernobyl. The company, known as Tepco, faces claims of as much as 11 trillion yen if the crisis lasts two years and potential takeover by the government, according to a March 29 Bank of America Merrill Lynch report.

Radiation “far below” levels that pose a risk to humans was found in milk from California and Washington, the first signs Japan’s nuclear accident is affecting U.S. food, state and Obama administration officials said.

The U.S. is stepping up monitoring of radiation in milk, rain and drinking water, the Environmental Protection Agency and Food and Drug Administration said yesterday in a statement.

Radiation levels in the U.K. are normal and extra testing isn’t needed to protect the food supply, the Food Standards Agency said.

The number of dead and missing from the earthquake and tsunami had reached 27,690 as of 10 a.m. today, Japan’s National Police Agency said.