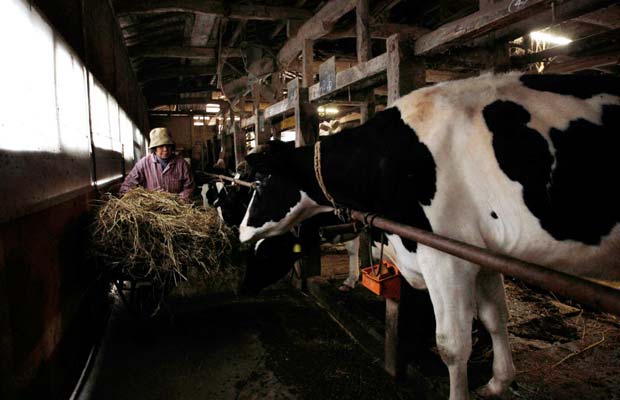 A woman feeds her cattle at a farm in Kawamata, Fukushima prefecture. Photographer: Ken Shimizu/AFP/Getty Images

(Bloomberg )– Japan has asked farmers to keep cows and cattle in barns as radioactive contamination of milk spread from Fukushima prefecture, where high radiation levels and fires have hampered repairs of a crippled nuclear plant.

“To prevent milk contamination, we are advising farmers that cows should be barred from grazing, kept inside barns and fed with grass harvested before the nuclear plant accident,” said Mitsuhiro Honda at the milk and dairy products division of the Ministry of Agriculture, Forestry and Fisheries. “We are not concerned about the safety of beef as the meat now on the market came from animals born more than two years ago.”

Japan has restricted raw-milk shipments from Fukushima and neighboring Ibaraki prefecture after tainted products were discovered through random testing. Repair work at the site of the worst nuclear disaster since Chernobyl in 1986 has been plagued by explosions, fires and leaks of toxic material. Tokyo Electric Power Co. plans to drain radioactive water from the turbine building of the No. 3 unit at the damaged nuclear plant, where two workers suffered radiation burns yesterday.

Shoppers in Tokyo rushed to buy mineral water and soy milk, ignoring government assurances that food and tap water are safe. Countries from Australia to the U.S. restricted food imports from Japan on fears of radiation.

“We don’t see eggs and pork at high risk of radioactive contamination because chickens and pigs are raised within facilities that shield them from the air and rain,” Takenobu Aida at the ministry’s livestock production and feed divisions, said in a phone interview. “The products should be safe if animals are fed with uncontaminated feed and water.”

Japan produces about 24 million metric tons of livestock feed a year using imported grains such as U.S. corn and soybeans.

The health ministry asked each prefectural governor last week to start testing agricultural and marine food products for possible contamination, as the nation struggles to stem pollution from the Fukushima plant.

“The first thing to keep in mind is that norms for contaminated produce are set with a huge safety margin,” Sergei Panchenko, senior researcher with the Russian Academy of Sciences, said in a telephone interview.

The contamination that has been reported in Ibaraki prefecture is above the norms, but doesn’t actually pose a threat to human health, he said.

“Seafood makes up a really large portion of their protein consumption, so they will be looking at filling that protein gap somehow,” said Tim McRae, economist with Meat & Livestock Australia from Sydney. Japan is also the largest pork importer.

The detection of cobalt, iodine and cesium in the sea near the crippled plant north of Tokyo this week hit fish sales in the world’s second-biggest seafood market and spurred consumers to seek meat as an alternative.

Japanese nuclear safety officials said today the reactor core at one unit of the damaged nuclear plant may be cracked and leaking radiation.

“What is more dangerous today is the fear-mongering around the situation,” said Igor Osipiants, director of the Technical Radiation Crisis Center at the Russian Academy of Sciences. “Let’s not make radiation a scarecrow. There’s always natural radiation, it’s like noise.”