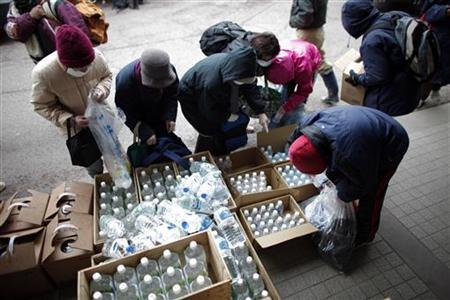 While the broader population continues to read stories of a stoic Tokyo population, casually taking each day of deteriorating news from Fukushima in stride, the reality is far from what is being represented. The latest escalation: Tokyo is running out of bottle water, now that the government disclosed (with a two week delay), that drinking water is irradiated.

“Many shops in Japan’s capital ran out of bottled water on Thursday after a warning of radiation danger for babies from a damaged nuclear plant where engineers are battling the world’s worst atomic crisis since Chernobyl.”

And if the government appears to be on the verge of losing control (and no city of 13 million can operate without water, no matter how bullish Douche Bank’s chief strategist sounds on CNBC) after disclosing this one factoid, what happens when the true extent of the secondary effects from Fukushima are made public:

“The government urged residents not to panic and hoard bottled water — but many shops quickly sold out.”

“If this is long term, I think we have a lot to worry about,” said Riku Kato, father of a one-year-old baby.”

Perhaps it is time for Malcolm Gladwell to do a tipping point analysis of herding mentality, vis-a-vis a decision to participate in a mass urban exodus. Which brings up tonight’s $64k question: is Snake Plissken too old for the “Escape from Tokyo” sequel.

Nearly two weeks after the earthquake and tsunami that battered the Fukushima complex and devastated northeast Japan, Tokyo’s 13 million people were told not to give infants tap water where contamination twice the safety level was detected.

Radiation levels above safety norms have also been found in milk and vegetables from the area around Fukushima, 250 km (150 miles) north of Tokyo.

The United States, Hong Kong and Australia have restricted food and milk imports from the zone, while Canada became the latest among numerous nations to tighten screening.

Radiation particles have been found as far away as Iceland, though Japan insists levels are still not dangerous to adults.

Jim Smith, of Britain’s University of Portsmouth, said the finding of 210 becquerels of radioactive iodine — more than twice the recommended limit — at a Tokyo water purifier should not be cause for panic.

“The recommendation that infants are not given tap water is a sensible precaution. But it should be emphasized that the limit is set at a low level to ensure that consumption at that level is safe over a fairly long period of time,” he said.

“This means that consumption of small amounts of tap water – a few liters, say – at twice the recommended limit would not present a significant health risk.”

Yet some lobby groups are disputing this, suggesting that risks are being under-played.

Physicians for Social Responsibility, a U.S. anti-nuclear group, called for a stricter ban on sales of exposed food.

“There is no safe level of radionuclide exposure, whether from food, water or other sources. Period,” said physician Jeff Patterson, a former president of the group.

Luckily, Tokyo is not a ghost city. Yet

Some locals and members of Tokyo’s large expatriate population left the city right after the earthquake and tsunami.

“It’s not just the radiation in water. I’m worried about aftershocks and it’s possible that things could go bad at the nuclear plant,” an office worker who only identified himself by his last name Yamaguchi said outside one shop that had run out of water bottles.

How long the tenuous status quo persists depends entirely on just how long the Japanese government belileves that a 10K Nikkei is more important than possible long-term (and lethal) radiation related aftereffects affecting its citizens.