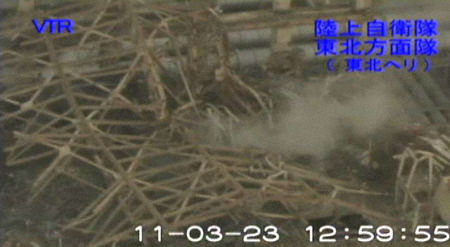 Crippled Fukushima nuclear plant
Handout photo shows the frame of the building housing the No. 3 reactor of the Fukushima Daiichi Nuclear Power Station in Fukushima Prefecture on March 23, 2011. The upper part of the building housing the reactor was blown out by a hydrogen explosion. Efforts are under way to put the crippled plant under control since the March 11 quake and tsunami. (Photo taken and supplied by the Ground Self-Defense Force)(Kyodo)

TOKYO, March 25, Kyodo — Tokyo Electric Power Co. said Friday it has begun injecting freshwater into the No. 1 and No. 3 reactor cores at the crisis-hit Fukushima Daiichi nuclear plant to enhance cooling efficiency, although highly radioactive water was found leaking possibly from both reactors as well as the No. 2 reactor.

The latest efforts to bring the troubled reactors at the plant under control are aimed at preventing crystallized salt from seawater already injected from forming a crust on the fuel rods and hampering smooth water circulation, thus diminishing the cooling effect, the plant’s operator said.

The utility known as TEPCO is also preparing to inject freshwater into the No. 2 reactor core.

The latest development in Japan’s worst nuclear crisis raises the risk of more workers being exposed to radioactive substances, hindering their efforts to restore the plant’s crippled cooling functions that are key to overcoming the crisis.

Prime Minister Naoto Kan said at a press conference Friday evening that the situation at the plant involving leaks of radioactive materials and other serious problems ”still does not warrant optimism.”

He failed to address what the Japanese people and the international community most want to know — whether the ongoing crisis will be brought under control soon — only saying that the government is putting all its efforts into preventing a worsening of the situation.

Early Friday, concern grew that the high-level radiation leak detected with the workers’ exposure Thursday could indicate possible damage to the No. 3 reactor vessel, but the government’s nuclear safety agency later denied the possibility, saying no data, such as on the pressure level, have suggested the reactor vessel has cracked or been damaged. The No. 3 reactor used plutonium-uranium mixed oxide fuel for so-called ”pluthermal” power generation.

While the high-level radiation is suspected to have come from the reactor, where overheating fuel rods are believed to have partially melted, it remains uncertain how the leak occurred, said Hidehiko Nishiyama, spokesman for the government’s Nuclear and Industrial Safety Agency.

He said further verification is needed to find out how the radioactive water reached the underground site where the workers were exposed. Huge volumes of water have been poured into the reactor as well as its apparently boiling spent fuel pool since they lost their cooling functions.

The three workers were transferred to the National Institute of Radiological Sciences in Chiba Prefecture on Friday afternoon, and two of them, who were hospitalized the day before for possible burns, were found likely to have suffered internal radiation exposure, the institute said, adding, however, that they have not shown early symptoms and do not require treatment.

Despite the partial halt of restoration work due to the technicians’ radiation exposure, TEPCO continued to make efforts to cool the overheating reactors and spent fuel pools.

In addition to the infusion of freshwater to the No. 1 and No. 3 reactors, it injected seawater to the spent fuel pools of the No. 2 and No. 4 reactors through pipes, and firefighters sprayed a massive amount of seawater onto the No. 3 fuel pool, the utility said.

The Nuclear Safety Commission of Japan, a government panel, also recommended voluntary evacuation as the release of radioactive materials from the plant is expected to continue for some time.

Following the March 11 quake and tsunami, the cooling functions failed at the No. 1, No. 2 and No. 3 reactors and their reactor cores partially melted at the plant on the Pacific coast around 220 km northeast of Tokyo, prompting seawater to be pumped in to prevent the fuel from being exposed.

The cooling functions of the pools storing spent nuclear fuel at the three units, as well as at the No. 4 unit, were also lost. The No. 4 reactor, halted for a regular inspection before the quake, had all of its fuel rods stored in the pool for the maintenance work.