Gold and silver rose on the open in Asia and have continued those gains so far in European trading with the Libyan military conflict leading to a safe haven bid and falls in the dollar and yen. The all time and multiyear nominal dollar highs set on March 7th ($1,444.95/oz and $36.75/oz) look set to be challenged as gold is less than 1% from its record high and silver less than 2% from its nominal recent high. 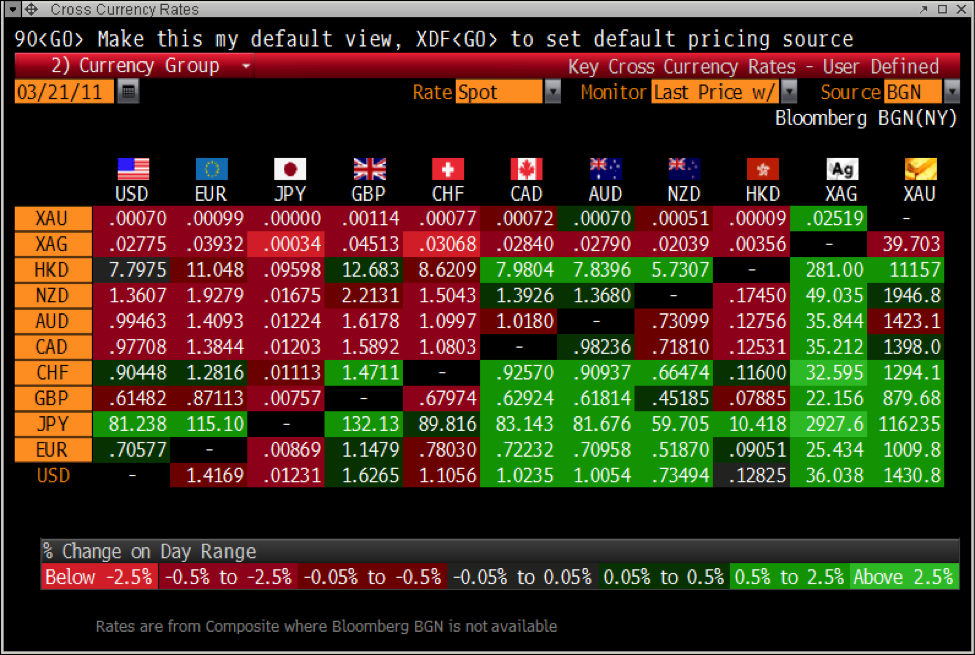 Safe haven demand continues especially in Asia and macroeconomic and geopolitical risk remains elevated. The tragedy in Japan and possibility of an ecological catastrophe has clouded the economic picture and created even more uncertainty which will lead to continuing physical demand.

In Japan, many ATMs have not been working for days now and this is leading to safe haven demand for gold. Should efforts to sort out the ATM problem not be resolved this week it could out pressure on the already strained Japanese financial system.

News that Iran and other nations with large dollar currency reserves have greatly increased their gold reserves (see News) will not come as a surprise to our readers. It stands to reason that they would given the degree of exposure which most creditor nations have to the U.S. dollar. It also stands to reason as some of them do not have cordial relations with Washington and may be reluctant to fund the U.S. continuing imprudent fiscal policies.

Gold was not the only precious metal being bought with the FT reporting that the sovereign wealth fund of Qatar, the Qatar Investment Authority is reportedly interested in acquiring both and gold and silver.

The QIA has assets estimated to exceed $65 billion and this one sovereign wealth fund alone could easily corner the very small physical silver market which is worth some $36 billion at today’s prices (1 billion ounces of above ground, investment grade refined silver bullion multiply by $36 per ounce).

Central banks and sovereign wealth funds with massive exposure to the dollar, such as the Russians and Chinese, are not going to shout from the roof tops their intentions to diversify into gold and silver bullion as this would lead to a surge in bullion prices and an even greater depreciation of their dollar holdings.

This demand is likely from the private sector rather than official but it is quite possible that there has been official buying in recent months. This may have come from the Chinese State Administration of Foreign Exchange (SAFE) which manages nearly $3 trillion of currency reserves. The Chinese has experienced the collapse of a paper currency and hyperinflation as recently as 1949 and therefore appreciate the value of gold (and silver) as currencies which cannot be debased. 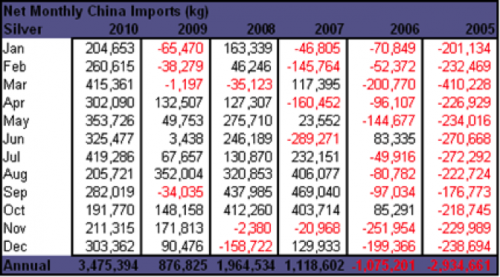 Iran has bought large amounts of gold in the international market, according to a senior Bank of England official, in a sign of how growing political pressure has driven Tehran to reduce its exposure to the US dollar.

Andrew Bailey, head of banking at the Bank of England, told an American official that the central bank had observed “significant moves by Iran to purchase gold”, according to a US diplomatic cable obtained by WikiLeaks and seen by the Financial Times.

Mr Bailey said the gold buying “was an attempt by Iran to protect its reserves from risk of seizure”.
Market observers believe Tehran has been one of the biggest buyers of bullion over the past decade after China, Russia and India, and is among the 20 largest holders of gold reserves.

They estimate it holds more than 300 tonnes of gold, up from 168.4 tonnes in 1996, the date of the most recent International Monetary Fund data.

The cable, dated June 2006, is the first official confirmation of Tehran’s buying.

Bankers said other Middle Eastern countries had also been quietly adding to gold holdings to diversify away from the dollar amid political tensions and volatility in currency markets.

“The totality of central bank reserves is not what is reported to the IMF,” said Philip Klapwijk, executive chairman of GFMS, a precious metals consultancy. “There’s probably another 10 per cent on top of that.”

Cables obtained by WikiLeaks cite Jordan’s prime minister as saying the central bank was “instructed to increase its holdings” of gold, and a Qatar Investment Authority official as saying the QIA was interested in buying gold and silver.
“There is no question some Middle Eastern countries are very interested in buying gold,” said George Milling-Stanley, head of government affairs at the mining industry-backed World Gold Council.

In the past two months, the political unrest in the Middle East has helped propel gold to a record price of $1,444.40 a troy ounce.

(MarketWatch) — Mizuho’s ATM crash may last to Tuesday or longer

Mizuho Bank’s system-wide breakdown, which has led to millions of Japanese ATM users being unable to withdraw cash or receive salary payments, could have far-reaching implications and put a wider strain on Japan’s banking system if its efforts to recover from the glitch fail this week.

The outages have affected so many people that Japan’s Financial Services Agency, the nation’s regulatory watchdog, is considering disciplining Mizuho, a person familiar with the matter said. The FSA was not immediately available for comment.

Mizuho is now facing its biggest system crisis in nearly a decade, amid a surge in demand for cash on hand as fears intensify from possible radiation leaks from a nuclear plant damaged by Friday’s earthquake, coupled with the fact that most companies are increasing transactions toward the end of Japanese fiscal year through March 31.

The system crash, which Mizuho blamed on excessive deposit activity following the devastating earthquake, also comes at a time when other banks and industries are struggling to cope with intermittent power outages around the greater Tokyo region. Most banks have been forced to temporarily shut down some of their ATMs due to blackouts, while others are voluntarily shutting down their ATMs to help save power.

The retail banking unit of Mizuho Financial Group Inc. (8411.TO), Japan’s third largest bank by market capitalization, said it aims to fully restore the system after the three-day weekend through Monday, but it remains unclear whether operations will return to normal operations on Tuesday.

On Sunday, Mizuho had operational level talks with its archrivals, the Bank of Tokyo-Mitsubishi UFJ and Sumitomo Mitsui Banking Corp., over how they could help Mizuho with transaction settlements, in case Mizuho’s troubles drag on, another person familiar with the matter said. Underscoring the gravity of the situation, the FSA has asked Mizuho’s rivals to help it through this crisis.

The two lenders are considering shouldering some of Mizuho’s load of unprocessed settlements. BTMU and SMBC, the core banking units of Mitsubishi UFJ Financial Group Inc. and Sumitomo Mitsui Banking Corp. are looking into how many companies’ payments they can handle without overburdening their own systems, the person said. Both banks were not immediately available for comment.

The lender’s system glitch, which occurred from Tuesday, affected more than 1 million cash transfer orders worth about Y830 billion ($10.3 billion) so far.

All of its 38,000 ATMs at its branches and convenience stores have been shut down between Saturday and Monday to speed up the system’s recovery. In its place, Mizuho extended operating hours through the three-day weekend through Monday at its 440 branches for account holders whose salary payments have been delayed by the system problem, allowing them to withdraw up to Y100,000.

Mizuho Bank President Satoru Nishibori earlier said that the bank is still investigating the locations of the branches where the problems originated and establishing why the transactions failed to process, but determining the reason will take some time.

The breakdown is the most serious faced by Mizuho since 2002, when it experienced similar problems that led to delays in processing 2.5 million public utility payments and other account settlements.

Gold climbed for a fourth day in New York as investors sought a protection of wealth from air strikes in Libya and on concern unrest may spread in the region. Allied officials said two days of missile and aircraft strikes have effectively grounded Muammar Qaddafi’s air force.

The leader denounced the coalition allied against him, which includes the U.S., the U.K. and France, as “the party of Satan.” Yemen’s President Ali Abdullah Saleh fired his cabinet yesterday and faced a growing internal revolt. Gold futures reached a record $1,445.70 an ounce on March 7.

As “tensions in the Middle East and North Africa region increase, the precious metals, particularly gold and silver, could be poised for further gains as investors seek to diversify towards safe-haven asset types,” James Moore, an analyst at TheBullionDesk.com in London, said in a report.

(Bloomberg) — China’s Silver Imports in February Were 245.6 Tons
China’s imports of silver in February were 245.6 metric tons, the customs agency said. Imports of platinum were 7.3 tons and palladium shipments were 3.3 tons, it said today.