Dollar Inflation remains the driver of the pricing environment for almost everything denominated in U.S. Dollars as long as the Fed continues to monetize debt.  The debt monetization creates Dollar Inflation that results in Dollar Devaluation.  As the Fed ramps up the QE II that they have announced will end in June, I expect Gold, Silver, and the PM stocks to aggressively rise.

In previous articles I have shown that fractal analysis suggests that:

Fractal analysis provides us with:

The chart below is a “line chart” of the 1979 portion of the long-term Silver bull and because it does not show the spikes in price inherent in a Silver bull the true upward run in price would be higher than what is actually shown.

The circled area on the Silver chart is analogous, in fractal terms, to where we are today.  The chart shows that the run out of the analogy to today’s correction was a bigger run than the price move up into it.  The estimated time to the next intermediate top measures to May/ June of 2011 which matches the stated current program of QE II in effect by the Fed. 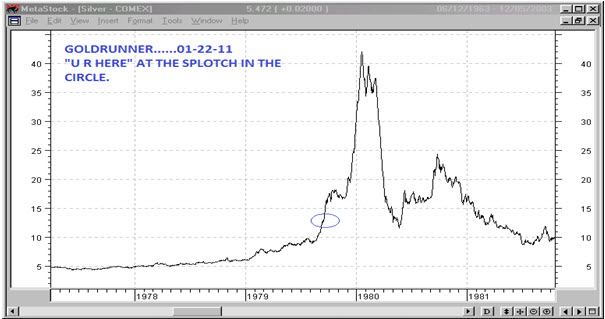 You are here at the splotch in the circle!

– The black lines in the chart below show the approximate slope for the current intermediate-term move as related to the similar fractal move in 2006.

– The red dotted lines off of the previous tops show a general range of where the next intermediate-term top might lie based on the symmetry of previous old top history series.

– The fib indicator is placed the same in both fractal periods – off of the last intermediate low with the 50% line off the top of the “recent high” (at black arrow) and the .618 fib off of the low that followed.  This fib placement fit the next intermediate-term top (at red arrow) in the 2006 Silver Fractal.  Today, an equivalent fractal top for Silver would come in around 56 into the May/ June 2011 time period at the RED ARROW. In the 2006 Silver Fractal, the next intermediate-term top came on a rise 65% above the last recent top. A similar target for May/ June would be to 52.8.  This difference between fractal periods appears to be logical since we have reached a more aggressive portion of the parabolic rise on the chart, today, versus 2006.

Red arrows and black arrows have been placed at analogous points on the chart.  We can see similar formations that have formed on the Technical Indicators in the RSI, ADX, and Slow Stochastics.

In summary, the black line in the current period reaches the red angles lines in an area where the lower red dotted line will be around $48 to $49 into the late May/ June period and the upper red dotted line will be in the $55 to $57 area in that same approximate period.  Considering all of the above, I will be looking for a potential top in Silver into May/ June 2011 to around $52 with the potential to see a spike up to as high as $56. 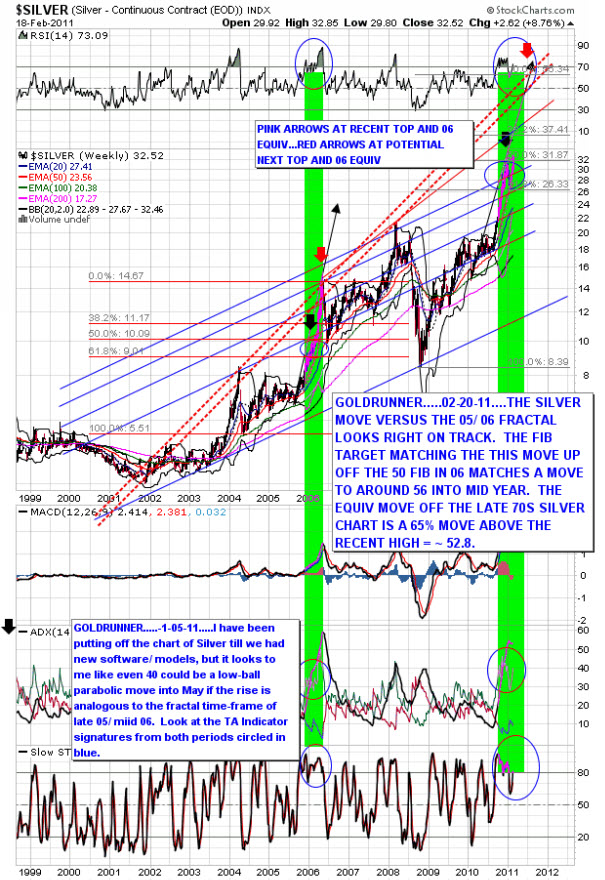 The chart below should clarify the work I did annotating the chart above.

To estimate the timing and the eventual price level of the next intermediate top in silver off the 2006 fractal, I have noted in both the current and 2006 periods:

In terms of price, my confidence in the use of the 2006 fractal comes from how closely the 05/ 06 fractal worked off of the “recent prime 2002 fractal.”  The move from point B to Point C in 2006 was almost precisely 2 times the rise from Point A to Point B.  Thus, we would expect the coming run up into the next intermediate term high to be about 2 times the rise from the last bottom before break-out up to the recent high. The current period “A to B” is approximately ~ 14.  So, 2 times 14 = 28 added to 31 gives us a potential rise, spikes included, up to about $59 for the coming intermediate term top.  This is only a comparison off of 2006.

I would be quite happy to see a rise up to $48 to $52 yet the move in Silver in the 1979 parabolic move suggests a spike to a point a bit higher as the psychology of a parabolic move would suggest. 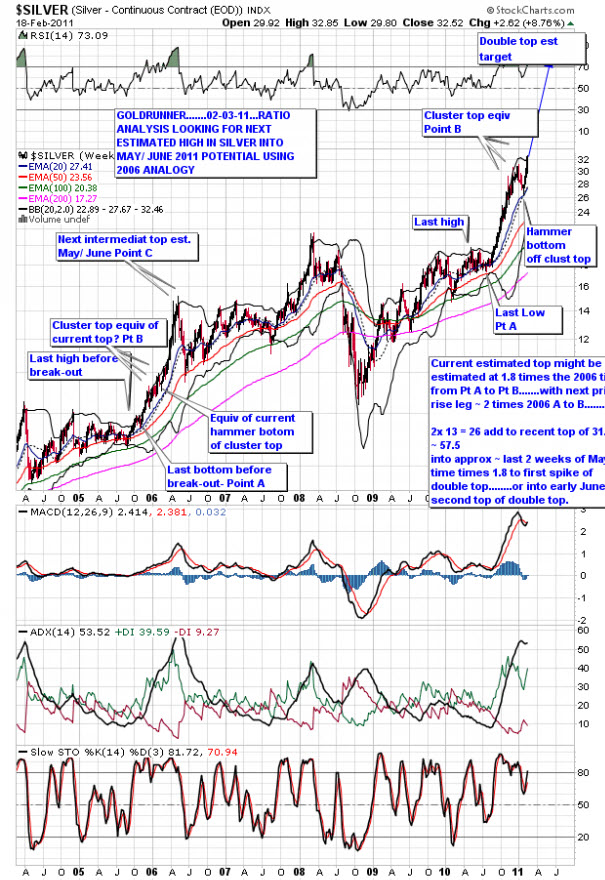 If Gold priced in Rand rises out of the ascending triangle to the upside as shown in the chart below, then. 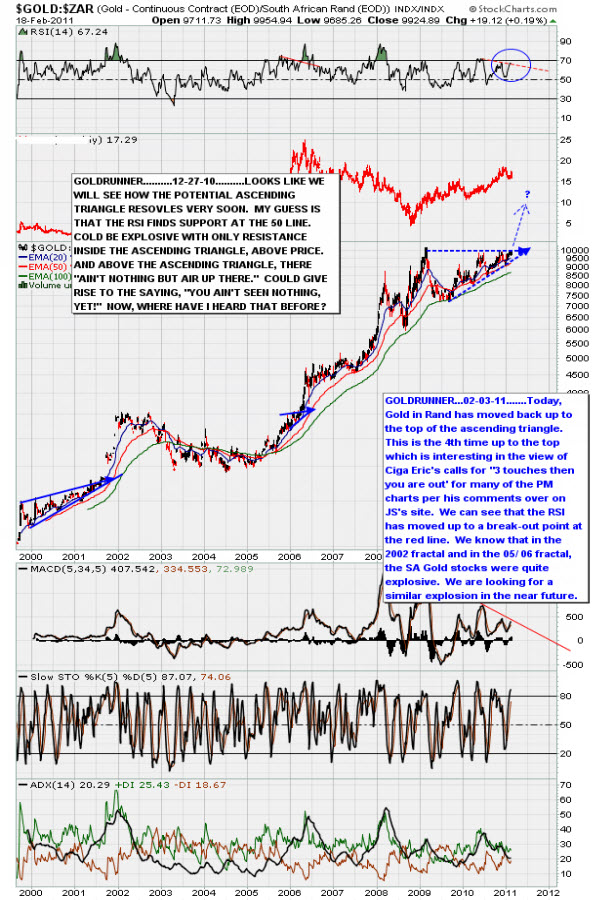 SA gold stocks could start to rise in a momentum run analogous to their runs in early 2002 and in 2005/ 2006. The RSI has already broken out while price sits at the top of the huge ascending triangle. It is “3 touches and out for the PM sector” (as per Ciga Eric), and if so, this is the 4th attempt at the top of the triangle. In the 2006 fractal period I showed with Silver, above, Gold in Rand rose sharply higher out of a triangle formation sending the SA Gold Stocks into an upward momentum run which, historically, have very large 3rd wave runs that tend to move in sync with the HUI Index.

The PM sector upside looks like it could be explosive in the coming months just as in the 1979 fractal. I think is time to get positioned to take full advantage of the coming move.