– Ron Paul Calls for Audit of US Gold Reserves:

This is not the first time the congressman has made his pitch. “In the early 1980s when I was on the gold commission, I asked them to recommend to the Congress that they audit the gold reserves – we had 17 members of the commission and 15 voted not to the audit,” said Paul. “I think there was only one decent audit done 50 years ago,” he said.

Though Paul did not say whether there is any truth to claims that there is no gold in Fort Knox or the New York Federal Reserve, he said, “I think it is a possibility.”

“If we ever get around to deciding we should use gold in relationship to our currency we ought to know how much is there,” said Paul.  ”Our Federal Reserve admits to nothing and they should prove all the gold is there. There is a reason to be suspicious and even if you are not suspicious why wouldn’t you have an audit?” he said. 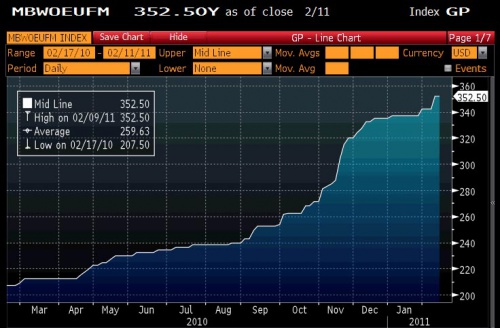 The comedy value of the various interpretations of this chart is simply priceless. We leave it up to our readers to share their views on why Tungsten has almost doubled in the past year, and what that means for the cost-benefit analysis for central banks in substituting “one metal” with “another”…