This is simply stunning. A quick parsing of the data released every ten days by the National Bureau Of Statistics of China indicates that the average price of food in 50 cities in the January 21-31 period has increased by 4.6% compared to the prior 10 day period (and 416% annualized)!

Granted, this is a simple average calculation of the 29 food items tracked without any weighing, although a quick glance at the components confirms that tonight’s Chinese CPI will likely be a doozy. Some of the key changes: cucumbers up 28.2% in ten days, kidney beans up 21.9%, rapes [no pun] up 14.5%, tomatoes up 12.9%, hair tails up 4.7%, bananas up 3.6%, chickens up 3.1%.

And this, again, is in the past 10 days! But not all is lost: Soybean oil actually dropped by 0.1%. Time for China to release an adjusted adjusted CPI which excludes all foodstuffs except for Soybean oil (and remember, in China, food is 31.4% of CPI)… which actually is exactly what is about to happen.

From the NBSC, which is somehow more transparent, and accurate, than the US’ own Department of Truth. 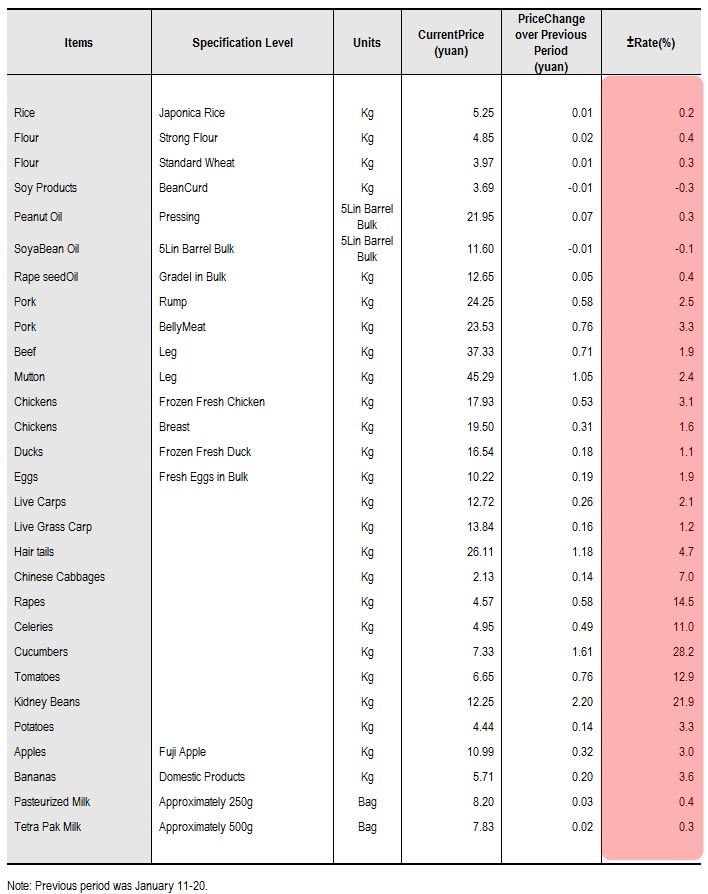 But fear not: that 31.4% for food as % of CPI…that’s about to be revised dramatically lower. And that will make inflation disappear.

Chinese stocks jumped more than 1 percent in early trade on Monday on talk of slower-than-expected inflation in January.

Traders said that consumer prices may have risen 4.9 percent in the year to January, well below the consensus forecast of 5.3 percent. The official data will be announced on Tuesday.

But they added that the surprisingly low reading may have been the result of changes to the weighting of the consumer price index (CPI).
The benchmark Shanghai Composite Index was up 1.5 percent at 0237 GMT.

The National Bureau of Statistics regularly adjusts the composition of the CPI basket, conducting small tweaks every year and a major adjustment every five years. It is due for the five-year shift.

The statistics agency is expected to reduce the weighting of food in CPI and, with rising food prices having led the pick-up in Chinese inflation in recent months, such a change would likely lead to a lower inflation reading.

So all shall be well, and people will never be hungry on paper ever again. In the meantime, buy stocks. Unlike gold and crude, paper is edible, if completely inert in the human digestive tract. Time for some biotech to come up with a drug allowing the stomach to decompose cellulose.