The big irony is that the Obama administration consists entirely of CFR, Trilateral Commission and Bilderberg group members, like all the other US administrations before.

Maybe we should call it the ‘Elite Puppet Wall Street Obama Bin Bush Clintonite administration’ instead.

Those criminals are bankrupting and destroying America.

– US Government Borrows 40 Percent Of Every Dollar It Spends

Prepare yourself for the greatest financial collapse in history.

Now here is the Council on Foreign Relations article … 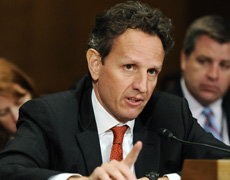 The U.S. Treasury begins taking steps to avoid hitting the government’s legal debt limit this week as political squabbling continues over how to rein in public spending. The Treasury is roughly $279 billion away from the legal debt ceiling of $14.294 trillion. Treasury Secretary Timothy Geithner warned Congress (Reuters) earlier this month the debt limit could be reached as early as late March. As an initial step, the Treasury will gradually cut the balance of a financial lending program with the Fed to $5 billion from $200 billion (TheHill). But that’s a drop in the bucket compared to the Treasury’s day-to-day borrowing needs, and the move was already factored into Geithner’s estimate of when the debt ceiling will be reached. Employing other special measures–such as issuing more short-term cash bills and suspending payments to government employee pension funds–could push back the date the limit is reached (Reuters) by about eight weeks.

Danger of hitting the debt limit–which could force the country to default on its loans–comes amid mounting domestic and international pressure for the government to produce a credible deficit-reduction strategy. The Republican House is threatening to vote against raising the debt ceiling (NYT) unless Democratic lawmakers and the White House agree to serious spending cuts. Helping its stance was last week’s announcement by the non-partisan Congressional Budget Office (MSNBC) that the budget deficit will reach nearly 40 percent of GDP this year under the tax cut deal struck by the White House and Republican lawmakers. The International Monetary Fund added to the pressure in a report stressing that low U.S. borrowing costs will not last indefinitely. The fund said Washington would need to make up for its delayed budget strategy (Reuters) by cutting more deeply in 2012 and laying out more long-term specifics.

Both Republicans and the White House are using jittery financial markets to back their arguments on the debt limit. Congressional Republicans say bond investors will flee (AP) if the debt limit is raised and the national debt grows. The Obama administration says few things will scare investors more than the threat of government default. Last week’s downgrade of Japanese sovereign debt by rating agency S&P from AA to AA- was a reminder of investors’ intolerance for political gridlock (FT) on tackling public debt, even in a large economy. For now, the United States is in a better fiscal position than Japan, where public debt stands at a staggering 200 percent of GDP. “The risk of a U.S. debt downgrade remains minimal (MarketWatch), but could weigh on sentiment” for the dollar, notes global currency strategist Marc Chandler. But hours after S&P’s downgrade of Japan, credit rater Moody’s warned that risks to the United States’ top AAA rating were rising (Reuters).

A sticking point in the U.S. budget battle is when cuts should begin. The government’s bipartisan deficit commission said in its final report that many of its recommended austerity measures should wait for evidence that a stronger economic recovery is underway. But House Republicans have vowed to pare federal spending (WSJ) this year. House GOP leadership is working on a measure to roll back federal spending to 2008 levels.

Whether the American public is behind the call for austerity is another matter. A January CNN poll (PDF) found that just one in five Americans regards deficit reduction as pressing enough to justify cuts to Social Security and Medicare. Only 18 percent of Americans chose the deficit as a top priority in the most recent NBC/Wall Street Journal survey (PDF), whereas job creation was the top choice at 34 percent. Stanford economist John Taylor argues fears of stymied job growth are no reason to delay cuts to government spending (WSJ), since there is “no convincing evidence that a gradual and credible reduction in government purchases will increase unemployment.” Taylor offers data showing that, over the past two decades, unemployment fell when private investment increased as a share of GDP. The debate will only intensify when President Obama sends his 2012 budget proposal (Reuters) to Congress in February.

On the blog Angry Bear, Mike Kimel offers data showing that, for most of the period between 1928 and the present, “the larger the federal government’s role in the economy in any given year, the faster the growth rate from that year to the next.”

In the New York Times, Frank Rich says “the state of the union itself could yet be in the hands of radicals whose eagerness to see the president fail is outstripped only by their zeal to make an ideological point, even if it forces America into default.”

Douglas J. Besharov and Douglas M. Call note in the Wilson Quarterly that Washington is not alone in embarking on austerity efforts but is now part of a global competition to develop more economically efficient tax and social welfare policies while maintaining an effective social safety net.

In this Center for Geoeconomic Studies paper, Francis E. Warnock investigates two factors that could substantially alter the long-run value of the U.S. dollar: the dollar’s reserve status and the sustainability of U.S. international debt.

This CFR GeoGraphics blog post traces the increasing U.S. share of global military spending since 1990 and an inherent underlying weakness.