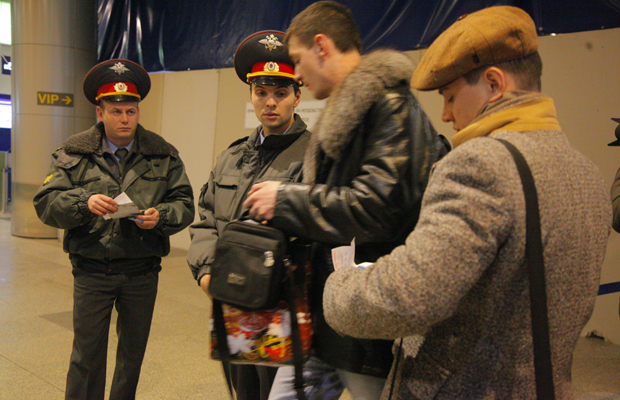 The Russian security services had been tipped off that a terrorist attack was planned at a Moscow airport a week before Monday’s suicide bombing, it emerged.

According to reports, the warning even gave details of precisely where the bomb would be planted and yet the authorities failed to stop the attack.

“The special services had received information that an act of terror would be carried out at one of the Moscow airports,” a security source told the RIA Novosti news agency.

“Agents were seeking three suspects but they managed to access the territory of the airport, witness the explosion which their accomplice carried out and then leave the airport,” the source said.

The website Lifenews.ru, which has close links with FSB, Russia’s security service, reported: “A tip-off with a warning that something was being prepared appeared one week before the explosion. Even the place, by the customs, was named.”

Dmitry Medvedev, the Russian president, admitted that security regulations were not being properly followed even though Domodedovo Airport boasts some of the most hi-tech scanning equipment in the world.

“What happened indicates that far from all the laws that need to be working are being used correctly,” he said.

The blast happened in the “meet and greet” area of the international arrivals hall where passengers are met after they pass through customs control.

A spokesman for the airport confirmed it was a “free access zone” that did not require a boarding pass to enter.

The airport does have a series of metal detectors on the entrance to the arrivals hall to scan people who are there to meet relatives. These are not always operational.

The blast will damage Russia’s international image as it gears up to hold two major sporting events, the Winter Olympics in 2014 to be held in Sochi in the North Caucasus and the 2018 Football World Cup.

In all, 77 airlines offer regular flights to Domodedovo, flying on 241 international and national routes, and there are five flights from Britain each day.

Built in 1964, it is 42 kilometres southeast of the centre of Moscow and is the largest of the three major airports that serve the Russian capital.

It is generally regarded as Moscow’s most up-to-date airport, but its security procedures have been called into question.

In 2004, two suicide bombers were able to board planes at Domodedovo by buying tickets illegally from airport personnel.

The female suicide bombers, Islamic militants, blew themselves up in mid-air, killing all 90 people aboard the two flights.

Philip Baum, the editor of Aviation Security International, said: “The problem is that metal detectors and X-ray machines are not effective at detecting bombs.

“And as you ratchet up the number of checks, you have large numbers of people standing in line and the queues themselves can become targets.”