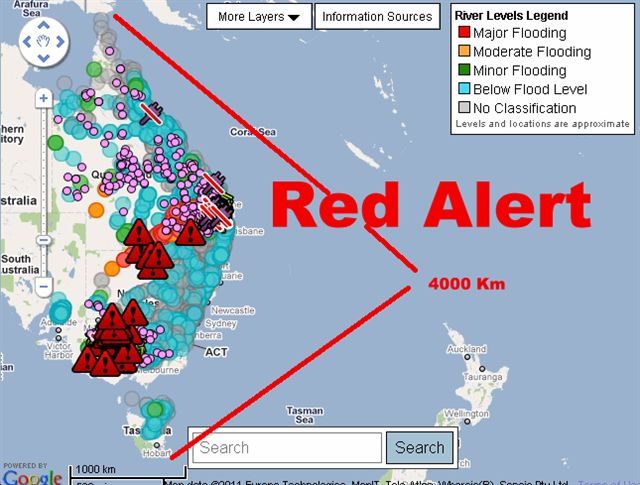 Towns in the southern Australian state of Victoria were on Monday bracing for their biggest floods in 200 years as the death toll from the natural disaster in Queensland rose.

Residents of the town of Horsham, which lies 190 miles northwest of Melbourne and is home to 14,000 people, were rushing to protect their homes with sandbags as the swollen Wimmera River threatened 500 properties.

The river is expected to peak overnight at more than 13ft and could inundate another small 12 towns.

“It’s predicted to be a one-in-200-year event,” a Victoria emergency services spokesman said.

“We are expecting [Horsham] will be cut in half by the river and that the highway be cut as well.”

Across Victoria, more than 1,600 properties have been affected by rising water and 3,500 people have been evacuated from their homes.

Last night a seven-year-old child was missing after falling into a flooded river.

Flooding has also spread into New South Wales, where nearly 7,000 people are reliant on airdrops of food and other supplies after being isolated by floodwaters.

The renewed crisis comes as Wayne Swan, the treasurer, said the widespread flooding, which has gripped Australia for almost one month, was the nation’s most expensive natural disaster in history.

Analysts suggest the flooding, which has affected Australia’s mining, agriculture and tourism industries and washed away roads and rail lines as well as damaging thousands of properties, could cost the country up to $20 billion (£12 billion).

Queensland is still struggling to recover after floods the size of France and Germany combined killed at least 31 people and inundated scores of towns over the past three weeks.

Last week, a severe flash flood in the Lockyer Valley west of Brisbane killed 20 people and destroyed entire towns. More than 10 people are still listed as missing. The state capital itself was hit by major flooding and is facing a clean-up operation that could last for months.

Campbell Newman, the lord mayor, has warned that volunteers checking the 30,000 homes affected by flooding in the city may find dead bodies.

“There may be people who didn’t get out of their homes who have been isolated,” he said. “We’re concerned as well that there may be elderly people or other people who have literally had a nervous breakdown.

They may be sitting in their homes in a dark room and need help now.” Meanwhile, Anna Bligh, the Queensland premier, has announced an inquiry into the floods that will consider if the state was properly prepared.

“The last three weeks have been truly shocking for all Queenslanders and now is the time to forensically examine the devastating chain of events and the aftermath,” she said.