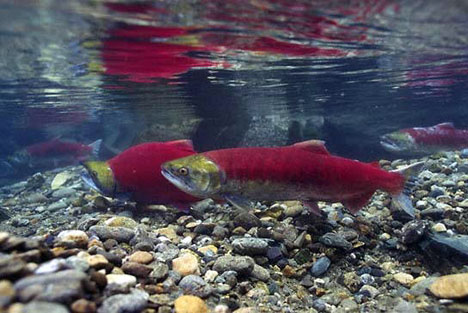 Large numbers of sockeye salmon are dying in the Fraser River, before spawning, because of a mysterious virus, new research suggests.

Historical records show that some fish always die en route to their spawning beds, but since the early 1990s the problem has become increasingly acute – with more than two million fish dying in some years. Researchers have long puzzled over what was causing the seemingly healthy fish to suddenly stop swimming and turn belly up.

A large team of researchers from the federal Department of Fisheries and Oceans and three Canadian universities has now found most of the fish that die before spawning have a common “genomic signature” – or a pattern that shows changes have taken place in an array of genes activated to fight infection.

“Our hypothesis is that the genomic signal associated with elevated mortality is in response to a virus infecting fish before river entry and that persists to the spawning areas,” says the report published in the journal Science on Thursday.

Studies on the spawning grounds show more than 70 per cent of the salmon that died before spawning had the genomic signature.

Professor Tony Farrell, research chair at the University of British Columbia’s department of zoology, said the research points towards an unknown virus, but the specific cause hasn’t been confirmed yet.

Prof. Scott Hinch, of the department of forest sciences at UBC, said work is already under way to try to determine where in their life stage the fish get the infection.

He said samples of juvenile fish are being examined, to see if they might have the “mortality-related signature” early in life, before leaving freshwater, and samples have also been collected from salmon at sea, during the mid-phase of life.

The research was done by 15 scientists from UBC, Simon Fraser University and Carleton University. It was led by Kristina Miller, head of DFO’s molecular genetics section.

Carla Shore, a spokeswoman for the federal Commission of Inquiry Into the Decline of Sockeye Salmon in the Fraser River, said the study is of interest but a decision has not yet been made as to whether to call the researchers to testify.