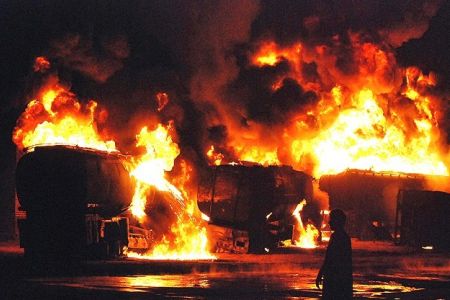 The US military and NATO rely heavily on the Pakistani supply route into landlocked Afghanistan, more so now that Taliban attacks are increasing. (file photo)

According to some witnesses, unidentified armed men on Friday night opened live ammunition on tankers at a time when the drivers were inside a roadside restaurant near Dera Murad Jamali in Balochistan province in southwestern Pakistan, a Press TV correspondent reported on Saturday.

There were no reports of casualties in the incident, but witnesses said the flames of fire spread to a nearby restaurant and a shop.

The assailants were seen fleeing the area in their cars, but no group or individual has claimed responsibility for the attack yet.

Witnesses have pointed to the late arrival of the police forces at the time of the attack.

According to Pakistani officials, nearly 80 percent of the fuel, spare parts, and other non-lethal supplies needed for the US-led soldiers in Afghanistan initially arrive in the southern port of Karachi from where they are transported to the neighboring Afghanistan.

NATO supply trucks in Pakistan are frequent targets of Taliban groups in the country.

The incident took place on the very same day that Pakistani President Asif Ali Zardari met with his US counterpart Barack Obama in Washington for talks ranging from security issues to cooperation in fights against Taliban and al-Qaeda groups in war-ravaged Afghanistan.

On Wednesday, US Chairman of the Joint Chiefs of Staff Admiral Mike Mullen said he sees an increase in bloodshed in Afghanistan as foreign soldiers begin to fire up their offensive against the Taliban elements.

“As difficult as it may be to accept, we must prepare ourselves for more violence and more casualties in coming months,” said the senior US military commander.

“The violence will be worse in 2011 than it was in 2010 in many parts of Afghanistan,” he concluded.