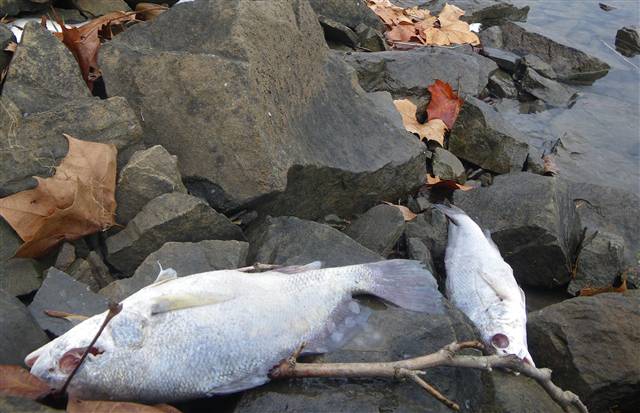 State officials on Monday were investigating why 80,000 to 100,000 fish washed up dead on the shores of the Arkansas River last week.

“The fish deaths will take about a month” to determine a cause, Keith Stephens, a spokesman for the Arkansas Game and Fish Commission, told msnbc.com.

The fish were found Thursday by a tugboat operator along a 20-mile stretch of the Arkansas River near the city of Ozark.

The mass kill occurred just one day before thousands of blackbirds dropped dead from the sky in Beebe, Ark., which is 125 miles away.

Officials said 95 percent of the fish that died were drum fish — indicating that the likely cause of death was disease as only one species was affected.

“If it was from a pollutant, it would have affected all of the fish, not just drum fish,” Stephens added.

Drum fish, which are bottom feeders, are not sought by fishermen, he added, and fishing was not banned as a precaution. “Right now it’s fine to fish,” KTHV quoted Stephens as saying. “If you go out there you can still fish for bass and crappie, catfish, it will be fine. Obviously don’t eat the dead fish.”Fish were still floating on the same stretch of river as of Monday morning.

Stephens said that nature will be doing the cleanup. “We’ll have raccoon and birds and things like that will take care of it so there is really no cleanup, it’s really too big. It’s contained along the river channel.”

David Lyons, the head of a local chapter of the Sierra Club, told msnbc.com that he was “waiting for the results of the pathology and toxicology tests before I make any judgments about the bird and fish kills.

“So far, the evidence does not suggest that pollution contributed to either the bird or fish kill,” he added. “If the test results indicate that contaminants were responsible, then local environmental groups will likely have several questions and concerns about the two events.”