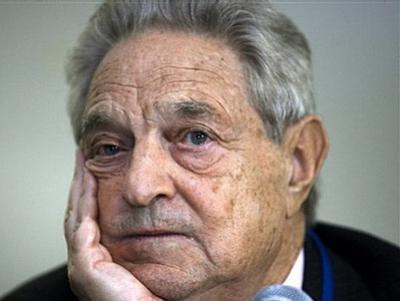 In the video you are about to see, George Soros talks about “the creation of a New World Order”, he discusses the need for a “managed decline” of the U.S. dollar and he talks at length of the global need for a true world currency. So just who is George Soros? Well, he is a billionaire “philanthropist” who came to be known as “the Man Who Broke the Bank of England” when he raked in a staggering one billion dollars during the 1992 “Black Wednesday” currency crisis. These days Soros is most famous for being perhaps the most “politically active” (at least openly) billionaire in the world. His Open Society Institute is in more than 60 countries and it spends approximately $600 million a year promoting the ideals that Soros wants promoted. Soros and his pet organizations have played a key role in quite a few “revolutions” around the globe over the last several decades, but these days the main goal of George Soros is to bring political change to the United States.

So exactly what is it that George Soros is trying to accomplish? Well, in a nutshell, what he wants is a Big Brother-style one world government based on extreme European-style socialism, strict population control and the radical green agenda. It would be a world where the state tightly regulates everything that we do for the greater benefit of the environment and of society as a whole.

Also, Soros does not seem to understand that both sides of the political spectrum in the United States are deeply influenced by the international banking elite. Sadly, the truth is that the same handful of elitist organizations has dominated the cabinets of every single president that we have had since World War II. If you doubt this, just check out how many members of each presidential administration over the last 40 years have belonged to either the Council on Foreign Relations, the Trilateral Commission or the Bilderberg Group. If you have never looked into this before, you will be absolutely shocked. No matter what president we elect, it is always the exact same organizations that always dominate their cabinets.

But Soros still seems very much trapped within the left/right paradigm and he seems absolutely obsessed with destroying the Republican Party. For example, Soros spent an insane amount of money attempting to defeat George W. Bush back in 2004. According to the Center for Responsive Politics, George Soros donated $23,581,000 during that election cycle to political organizations that were trying to keep Bush from being reelected.

Soros has also been a tremendous backer of Barack Obama, although lately Soros seems a bit disenchanted with him. Through organizations such as the Center for American Progress and MoveOn.org, Soros is constantly trying to influence the state of American politics.

So what is George Soros thinking about these days? Well, in the video posted below you will see Soros discussing “an orderly decline” of the U.S. dollar, the coming global currency and the importance of the New World Order….

Did you noticed how uncomfortable Soros was when he was saying the term “New World Order”?

The truth is that he knows exactly what that phrase means. He knows that it is a phrase that he probably shouldn’t say and that will get a lot of attention.

But he said it anyway.

Soros also seemed a bit uncomfortable as he discussed “an orderly decline” of the U.S. dollar.

Soros has been saying the the U.S. dollar needs to go down for quite a while now, and he speaks of the coming fall of the dollar as if it is inevitable.

The only thing that Soros seems to fear is that the “managed decline” of the dollar could “get out of hand” and could lead to global financial chaos.

Soros even had the gall to say that having the dollar be the reserve currency of the world is not in our national interest and that a move to a global currency is “a healthy, if painful, adjustment” that we are just going to have to endure for the greater good of the world economy.

But shouldn’t the American people have something to say about all of this?

Perhaps the American people do not want a “managed decline” of the U.S. dollar.

Perhaps the American people do not want any part of a new “global currency”.

Perhaps the American people do not want any part of a “New World Order”.

But to men like George Soros, it doesn’t really matter what “the little people” think. In the world that Soros lives in, those with overwhelming amounts of money and power know what is best for the rest of us, and if “the little people” don’t seem to want to go along initially then public opinion can be bought if you just spend enough money.

The sad truth is that we already live in a global economy. Just go into just about any store across the United States and start picking up products to see where they were made. Very few of the things we buy are still made in the United States.

Today, labor is a global commodity. American workers must now directly compete for jobs with those making slave labor wages in China and India. The fact that millions of U.S. jobs are being offshored and outsourced does not bother advocates of globalism at all because it is supposedly a beneficial thing for the overall global economy.

And most Americans have little to no idea just how much influence international organizations such as the United Nations, the World Bank, the IMF and the WTO have over our daily lives.

The truth is that we already live in a world that has been deeply, deeply integrated. As this continues, at some point it will only seem “natural” for America to agree to a true global currency and full global political integration.

Let us hope that day never arrives. Or at least let us hope that the American people wake up enough to not just go passively into a “New World Order”.

But perhaps you disagree. Perhaps you believe that integrating our economy, our currency and our government with the rest of the world would be a wonderful thing. If that is the case, please feel free to leave a comment explaining exactly why globalism is such a wonderful thing for all of us….

– George Soros Dumps US Equities – Did He Buy Even More Gold?

– Soros cashes in again on the collapse of the pound